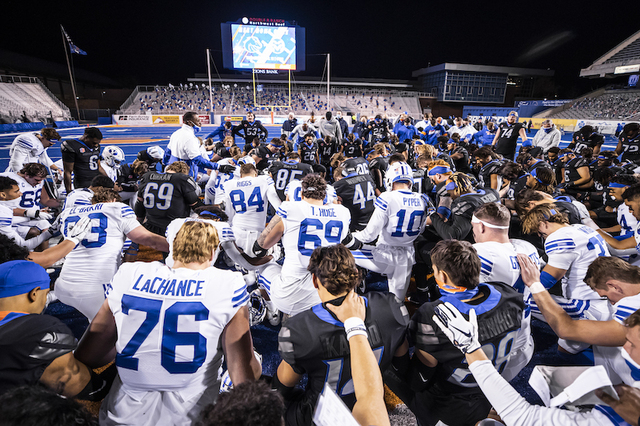 ‘Faith is much bigger than football’: Why BYU and Boise State prayed together on the field after last week’s game

The big rivalry game between Brigham Young University and Boise State University was over, and Pastor Mark Thornton, the Idaho team’s chaplain, approached head coach Kalani Sitake to let him know their team was about to pray.

Sitake asked if they could join them and called his players, who had been heading off the field following their 51–17 win on Friday, November 6, back to midfield.

“We’re not going to turn that down, when a team invites our team to kneel down and praise God for the opportunity we had to play,” Sitake told Deseret News. “What a great invite from them. I was really impressed with them the entire game, just a great program with wonderful sportsmanship, and, you know, hopefully we can be able to have that type of impact on other programs as well when we play them.”

The prayer was meaningful for both teams, whose members came together in faith, recognizing, as BYU’s wide receiver Gunner Romney said, that “once you get off the field, they’re your brothers.”

► You may also like: The story behind BYU football’s ‘Love One Another’ t-shirts

Boise State co-captain Avery Williams also reflected, “I don’t know if an entire whole team has joined us before in the years that I’ve been here. That means a lot.”

While Boise State is a public school, its students are very religious—Thornton approximated that 60 percent are evangelical Christians, 30 percent are Latter-day Saints, and others are Catholics, “seekers,” or agnostic. The night before a game, Thornton leads the team in prayer, and on game day 95 percent of the team joins a player-led prayer for pregame warmups. Some even pray with Thornton individually before the game begins.

Players like Williams find that no matter how big the game is, football is just a sport, and it’s natural to come together and be united in faith.

Read more about the prayer and the meaning it had for both teams at Deseret News.