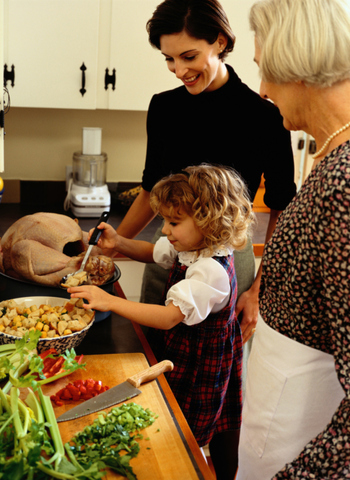 {Food Dish} Are You a Better Cook Than Your Mom? + Poll

I think we can safely say that all of us have felt less domestic than our moms at one time or another. I can’t tell you how many times I’ve been out with my own mother and looked at a cute outfit, only to have her say, “Oh, I could sew that in a second!” Well, for a woman who lived in a time when people basically made their own clothes, that’s fine and dandy. But I didn’t. And I can’t.

Women today generally feel less domestic than their moms, it’s true—but one area in which we shouldn’t is cooking. According to a new study (on British women, so it may be different in the U.S.), women of today know more recipes by heart than their mothers: 21 versus 17. (Lest you be intimidated, recipes women listed as knowing by heart include fajitas, spaghetti, sausage and mashed potatoes, etc.) Women today are also more willing to be adventurous in the kitchen—they think it’s important to expose their children to lots of different foods.

I’ve definitely noticed a trend toward foodie-ism, or at the very least a general public who appreciates and really enjoys good food. With so many cooking shows, the explosion of online recipe forums, and more diverse eating out options, it’s not surprising that home cooking has become a decidedly more exciting prospect for women.

So, pat yourself on the back. Though times and talents have changed, they haven’t all changed for the worse.

Your turn: What was your FAVORITE or LEAST FAVORITE dish from when you were growing up?