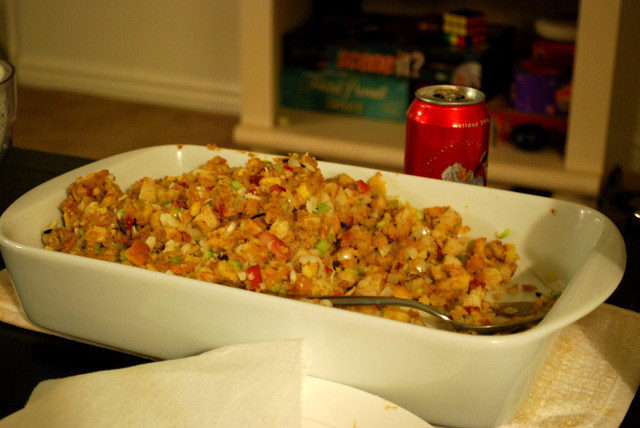 Stuffing is a fairly recent favorite of mine. Previously I dismissed it as soggy and weird, but in the past few Thanksgivings, I’ve come to appreciate the delicious marriage of bread and herbs.

And last Thanksgiving, I discovered a delicious version. My Aunt Louann’s stuffing. Just thinking about it makes my mouth water.

It’s fairly simple—just dress up a few boxes of Mrs. Cubbison’s Stuffing. But the flavors are anything but simple. With complementing additions of bacon, cheddar cheese, and a little wild rice, it has great texture and unique flavors that make it a party in your mouth. With her permission, I share it here:

(1) You can also use 2 of the 3 stuffing mixes instead of all three; adjust butter and liquid accordingly, using the preparation instructions as a guide.

(2) If stuffing in a bird, decrease the liquid amount to 3 cups or so.

(3) You can also increase butter to as much as 3 cups; liquid should be decreased accordingly.

(4) Finally, increase the bacon to 1 pound for even larger recipes.