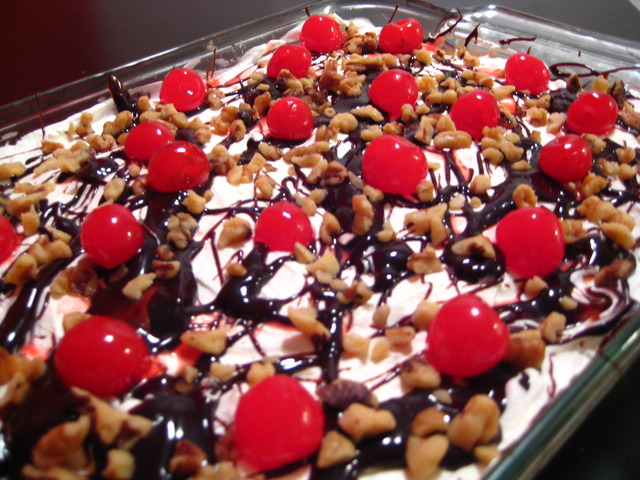 Click here for the recipes that go with these reviews.

The greatest thing about this cake is how unique it is--I've never seen anything remotely like it. If you're aiming for a lot of wow factor with little effort, this is the cake for you. The cake is ridiculously easy (as long as you have a food processor to grind your graham cracker crumbs) and is more assembly than actual baking. I doubled the graham cracker crust because I'm a sucker for those things, and I also added some ground walnuts into the crust to give it a better flavor depth and to help counteract some of the sweetness of the dish. Beware of the filling, though. It said to beat it for 10-12 minutes (the hardest part of the recipe) until light and fluffy. I beat it 12 minutes and saw minimal change. It was nice and light, but it was definitely still liquid and not "fluffy" like whipped topping. But it tasted great anyway.

I don't love to bake, but there are plenty of times when I need to bring a dessert to some kind of social gathering. The lemon surprise cake is a fabulous option. There are just three simple steps: 1. Bake a cake from a yellow or white cake mix (I chose yellow) 2. Top cake with cook-and-serve lemon pudding 3. Add a layer of whipped cream. The lemon pudding and whipped cream toppings add a great twist to what would otherwise be an ordinary frosted cake, so you're sure to win points for creativity. The cake is light, moist, and tastes delicious. Tip: keep the layer of whipped cream thin so the lemon flavor is sure to come through.

The first thing I noticed about this recipe is that it calls for powdered whey. I thought that stuff only existed in nursery rhymes, but I guess it does in baking, too. It’s really tough to find in the grocery store, so I recommend skipping it altogether and going for a more traditional crust. The whey is used with almonds to make a graham cracker-like crust, but a real graham cracker crust will work just fine. The cheesecake was pretty good, very basic. Just make sure you give yourself plenty of time to make it—five hours!

Cream-Filled Cupcakes
Kate Ensign-Lewis, Online Editor
Homemade cream-filled cupcakes are a new favorite of mine, so (as usual) I was really excited to make these. The cupcake part was easy enough—just dress up a chocolate box mix cake. The cream filling was . . . not so easy. This is an old-fashioned frosting that starts on the stovetop and ends with lots of whipping in a stand mixer. After following the steps (substituting butter for margarine, since I’m morally opposed to margarine), I realized my filling was WAY too loose to work inside or on top of cupcakes. Even after adding lots of extra powdered sugar, and refrigerating, it was too loose. It was delicious—like custard—but it melted right off the cupcakes (you can see as much in one of the cupcakes in the background of my photo).

What had I done wrong? After re-reading the recipe, I realized it was similar to another I had recently read in a magazine—so I went to read that recipe again. The problem was with how long I had cooked the frosting. The Lion House recipe simply says to cook “until thick,” but “thick” is subjective. My magazine said to cook “until it’s so thick, it’s difficult to whisk.” I had only cooked until it was the consistency of crème pie filling. Oops. So, if you make this frosting (and I suggest you do—like I said, it’s delicious), make sure to cook it until it is really thick (about 6 minutes). And enjoy the fluffy goodness of custardy frosting inside, and on top of, a chocolatey cupcake.

Click here for the recipes that go with these reviews. And, to learn more about the cookbook, Lion House Cakes and Cupcakes, click here.