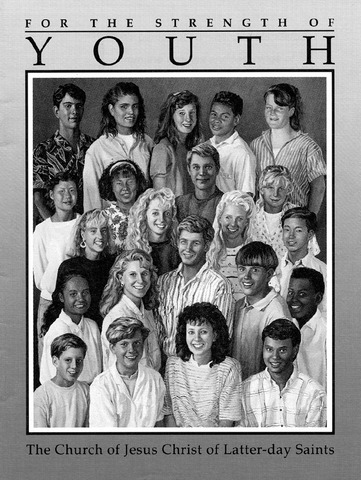 Image of the 1990 For the Strength of Youth from byu.edu.

Society must have changed drastically in the years to follow because For the Strength of Youth was almost completely different when it was updated in 1990. The Church standards remained the same, but the world seemed to be in more need of moral direction. “The title For the Strength of Youth is not new,” explained Ardeth Kapp, the Young Women general president at the time. “But because of the trend toward immorality and other ills in society and also because of the expansion of the Church into new geographical areas over the years, a more comprehensive, more explicit statement of Church standards was needed.”

The 1990 edition of For the Strength of Youth contained several more sections of what Sister Kapp said was needed—explicit statements of the Church’s standards. Youth were still taught about appropriate dress and dating, as in earlier editions, but topics like language, sexual purity, mental and physical health, and Sunday behavior were added.

There were still some specific directions on subjects such as dress. While pants and “grubbies” no longer raised concern, short shorts, tight pants, and other revealing attire, including off-the-shoulder and low cut shirts, became an issue. Youth were counseled to “dress in such a way as to bring out the best in yourself and those around you.”