In 1984, screenwriter Barry Marrow met a man so inspiring, it led to the screenplay of a film that won four Academy Awards and two Golden Globes, not to mention being nominated for four other Academy Awards.

The film was Rain Man, and the inspiration behind it was Laurence Kim Peek.

At the age of 18 months, Peek could read both of the open pages in a storybook at the same time. Though he couldn't operate a light switch or button his shirt on his own, Peek could retain 98 percent of the information of anything he read, recalling the names of roads, historical facts, dates, composers, and nearly every single word in thousands of books, including LDS scriptures. "He had a bottomless memory," Daniel Christensen, clinical professor of psychiatry at the University of Utah's Neuropsychiatric Institute, told NPR. And that memory earned him the nickname "Kim-puter."

Unlike most savants, Peek did not have autism. Instead, he suffered from a rare birth defect known as agenesis of the corpus callosum, meaning the two hemispheres of his brain lacked connections. 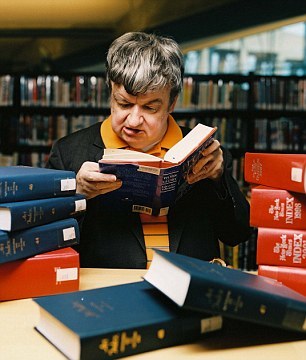 Peek was a close friend of President Thomas S. Monson, and the two often talked together until Peek died of a heart attack in 2009. Peek graduated from seminary 20 times and shared his gospel knowledge with thousands as he traveled the world demonstrating his abilities and inspiring others. "He's been a missionary his whole life," Peek's father, Fran, said of his son.