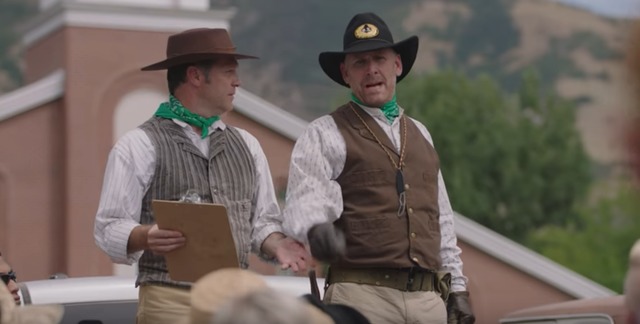 A new feature film, Trek: The Movie, is set to appear in theaters soon. Written by veteran Hollywood screenwriters David Howard (writer of Galaxy Quest) and Jon Enos, this family comedy follows a group of LDS teens as they stumble their way through the sagebrush looking for their pioneer heritage and their own testimonies. Alan Peterson, producer/director of the Christmas Dress and one of the stars of The Cokeville Miracle, is the director.

The tagline of the movie, "It's a Mormon thing," perfectly sums up the humor and spunk of the movie.

Trek, follows a young Mormon teenager named Tom and his friends on their handcart journey. Along the way, they try to smuggle in unsanctioned food, battle sibling rivalry, encounter a “special ops” Young Men's leader, match wits with a twinkie-loving skunk, and ponder doctrinal brain teasers like, “Do general Authorities go to PG-13 movies?” But, when they encounter unexpected trouble, their faith is tested much like their pioneer ancestors.

“It’s such a great script that combines laugh-out-loud moments and really touching characters; I think everyone will find something to love about the film,” says Peterson.

► You'll also like: How to Survive Your Trek Experience

The idea for the film was first conceived by Rich Raddon over 10 years ago. Raddon, former director of the L.A. Film Festival and founder of movieclips.com, approached his good friend Howard with the idea for a comedy about the very popular pioneer treks.  “Which was such a no-brainer,” according to Howard.  Known for his screenplay, Galaxy Quest, Howard continues, “It felt like the stage was already set with characters we all already knew; fun people, crazy people, searching people. It was just a question of determining what stories we would tell with them. Plus you have the dynamic of the worlds of the youth colliding with that of the adult leaders. There was this really rich tapestry of organized chaos to play with.”

Find out more at trekthemovie.com.