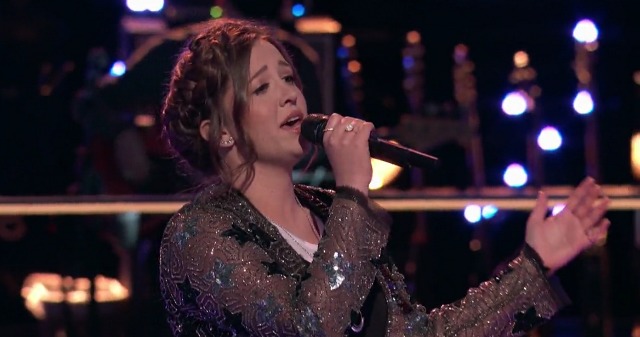 LDS "The Voice" Contestant on How She Shared Her Faith on the Show: "God Gave Me This Talent to Bless Others"

Lauryn Judd gave an incredible performance singing “Every Little Bit Hurts” by Brenda Holloway in the last night of the team battles on NBC’s The Voice. Although she will not be moving on to the knockout round, she has made an impression on the judges and our hearts.

On last night’s episode of The Voice, Judd’s coach Alicia Keys chose Judd’s team partner Lilli Passero to move on to the knockout round but expressed her excitement for both artists and their talent.

“I really loved the two of you because you both are so obviously aware of who you both are,” Keys says. “You both really evolved this even further in the ways that complimented you individually and that shows true artistry.”

► You'll also like: Adam Levine Calls LDS 15-Year-Old's Performance "Spectacular," Sends Her onto Next Round of "The Voice"

The other coaches on The Voice agreed, complimenting Judd.

“You have such a signature sound and I love that!” Gwen Stefani says.

Adam Levine says, “Lauryn you’re 17 years old. I mean it’s crazy that you could be equal ability, amazing presence, I was really enamored with you both.”

“What Lauryn did is amazing because her voice is so different and does all these little sounds and things that she’s perfected,” Blake Shelton says.

Judd shares with us her reasons for singing, how she bears testimony, and what she hopes for the future from her experience with The Voice.

“I like to think that God gave me this talent to bless others. I've worked hard to practice and develop my craft and I feel that if I don't share that God given talent, I would be letting Him down. I believe that my singing can be used as a missionary tool and that's what keeps me singing,” Judd says.

Being a part of The Voice has been an experience where Judd says she can share her faith with others around her.

“Some of the artists on The Voice do not share the same standards that we have as Latter-day Saints. I decided to always try to be positive about every situation that was put in front of me and stand for what I know is right,” Judd says. “I tried my best to be a good example to others and if they had questions about the LDS Church, I would do my best to answer them with the Spirit. I've learned that others really do notice the light of Christ when we have the Spirit.”

so grateful for all of you. tonight is only the beginning of an amazing adventure. #TeamLauryn — lauryn (@laurynjudd) March 29, 2017

Grateful for the chance to build from this platform to perform uplifting music, Judd shares that her plan after the voice will be to continue lifting others.

“I hope to create music with a soulful, jazzy, pop sound like Carole King and John Mayer, but I will make sure that my music is appropriate and has a good message. I also hope to do some music for the Church and to be able to share my testimony through music,” Judd says. “Most of all, I want to create music to help people. To lift them, help them, relate to them, and just impact them in their everyday lives.”

More than a contest and more than a chance to gain popularity as an artist, The Voice has opened Judd’s eyes to see who she is and how God is blessing her.

“This experience has really helped me realize that I can trust God in everything that I do. I've learned that in every experience, God has my best interest in mind and that everything happens for a reason. I've grown to find who I am as a person and as an artist,” Judd says.

Lead photo a screenshot from the video

Mormon Life Faith Music The VoiceFaith,Music,The Voice,Mormon Life
Comments and feedback can be sent to feedback@ldsliving.com