"God Is Real": How One Family’s Faith Is Helping Them Through the Unthinkable

From the name—“It’s just a bump in the road”—to the now 31 posts and counting, Kim and Ryan Dahlberg’s website is a typical blog spot about a sobering, atypical topic. After all, few people have battled with stage 4 metastatic melanoma, a disease which, in Ryan’s case, has resulted in 130 tumors growing throughout his body over the last year.

“Although the news came as a shock to us,” Kim wrote, “we could see that the Lord indeed had prepared us to fight this battle.”

Just a Bump in the Road

While he had been bracing himself for the worst after finding a tumor under his arm—thinking it was probably lymphoma, a different form of cancer—Ryan wasn’t prepared for his diagnosis or aware of just how serious it was.

“We were a bit naïve in the beginning, not completely understanding the severity of his condition,” Kim wrote on gofundme. “After much prayer and fasting, we were hopeful that the decisions we were led to would save him, just like that . . .  WA-LA! We were quickly humbled and realized we were in for quite the journey.”

From its onset, however, Ryan remained hopeful, choosing to place his trust in the Lord.

“I said to Kim and everyone else that day on the phone that this is just a bump in the road and something that I’m going to beat,” he said.

“Of all the things I've learned in this life,” Ryan wrote, “it's that God is real. He loves me and is aware of me. My Savior suffered in the Garden of Gethsemane so that He could perfectly support me and strengthen me. I have faith and trust in Him and I'm not afraid.”

If one thing is made clear by Kim’s profile page, it’s that the Dahlbergs are members of The Church of Jesus Christ of Latter-day Saints.

Their first listed interest is the Church, and their favorite book is “The Book of Mormon, it changes lives!”

Nearly all of their longer posts, too, contain some thought concerning the hope that stems from the gospel or, as they have coined it, having faith over fear.

The saying has become something of a battle cry for the family, and they have even designed shirts with the phrase emblazoned on the front. 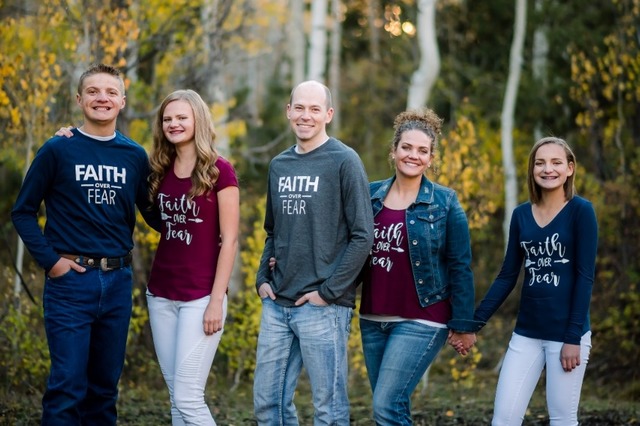 They now wish to share that message with the world.

“In these instances, if you allow fear to take over, it inhibits your ability to act, and it especially inhibits the Spirit’s ability to help you. . . . As I studied the scriptures, I just felt like I grew closer to God, and I came to understand that He really is with us through everything, but if we don’t have the faith that He is there for us, then He can’t help us,” Ryan said.

The Dahlberg family has done everything in their temporal power to fight the disease, from the non-traditional, such as adopting keto-based diets and using essential oils, to having surgery and everything in between. Ryan and Kim credit their faith, however, and the timing of the Lord as the most essential aspects in their road to recovery.

An example of the Lord's goodness and tender mercy came in 2019 when Ryan began experiencing new symptoms including vomiting spells and splitting headaches. After visiting the emergency room, however, the on-staff doctor was unwilling to offer much aid and was dismissive of the idea of a brain scan.

When Ryan continued to get worse, Kim and his parents took him back to the emergency room the next day, and this time his regular physician was in and performed the check-up. After a CT scan which revealed two brain tumors that needed to be removed immediately, Ryan's doctor sent him for emergency brain surgery.

After the procedure, Ryan wrote, “The doctor at the ER the first night we went . . . He seemed reluctant to really care about me and my situation. If the brain scan had been done that night, I wonder how much effort he would have put in to ensure I was truly taken care of. Waiting 12 hours to return to the hospital placed me in the hands of a man who I have had a relationship with for multiple years and who spent more time than was necessary ensuring I was taken care of. I believe that is a significant tender mercy from the Lord, ensuring that I would be placed in the best hands capable of taking care of me. I'm grateful for that one-day delay and have learned throughout this process that God's understanding and vision far surpasses our own. While our prayers might not be answered right away or how we want them to be, we must be willing to trust in His loving and caring hand.”

Ryan also referenced Elder David A. Bednar’s talk “Accepting the Lord’s Will and Timing” in which he asked:

“Do you have the faith to not be healed?”

“And I do,” Ryan said. “That we do live after this life, and that we can see our family again, I believe, for me, that is the ultimate source of comfort.”

Enduring to the End

“I used to ask God why I had to deal with trials and, quite frequently, to remove those trials from my life,” Ryan wrote. He continues:

“What I failed to understand then was that the purpose of this life is to endure trials. That's the whole point of our existence here on earth. We gain experience by going through trials. What I have learned is this:

"If we rely upon God, our Savior and Redeemer Jesus Christ, and the Holy Ghost at all times, in all places, and with all things, we will be supported, upheld, and strengthened sufficiently.”
“Seek God and His Gospel and this life will be all the more joyful and satisfying. I know He lives and that if we are faithful to the end, we can and will endure all things.”