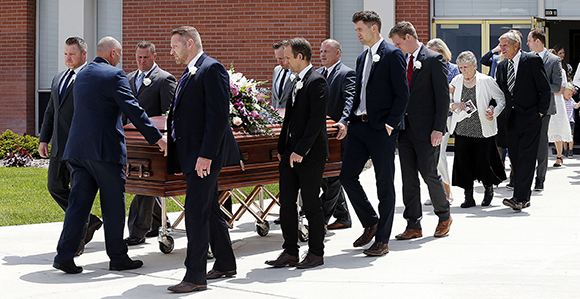 "He Gave His Whole Life to the Savior": Elder Vaughn J. Featherstone Remembered by Apostles, Family

At his funeral, Elder Vaughn J. Featherstone was remembered as "a lover of people" whose life "was a daily manifestation of faith in the gospel of Jesus Christ." As Elder Featherstone testified in his last general conference address in 1999, "I thank God for the one link that still holds, the one light that will not go out. Remember how blessed you are to have prayer in your homes."

Decades ago, President Eyring was serving as the commissioner of the Church’s Board of Education. At the time, a heated public school busing controversy had developed in Southern California, angering many of the local Latter-day Saints. A proposal was made by many of the members to set up Church-operated schools at area meetinghouses.

The president of the Church and other key leaders chose not to accept their proposal. Brother Eyring was sent to California to deliver the decision to the local members.

Elder Featherstone, who was presiding over the Area and was sympathetic to the challenges facing the California parents and their children, met him in California.

As expected, Brother Eyring’s message to an emotional gathering of members “was not well received.” But then Elder Featherstone stood before the group and said that Brother Eyring had just shared with them the will of God’s prophet.

“How many of you in the room,” asked Elder Featherstone, “will sustain the prophet?”