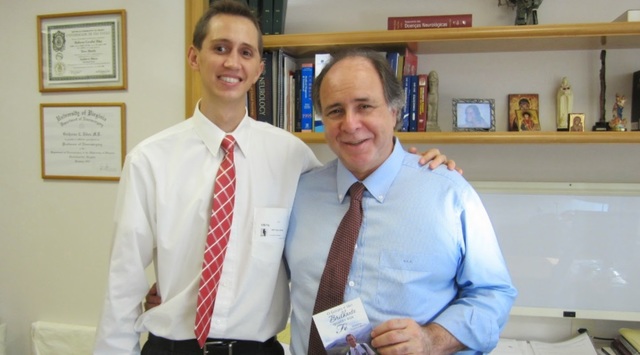 "He Will Not Survive": After Being Hit by Bus, Missionary Inspires Thousands with Miraculous Recovery

Five years ago, Elder Britten Schenk was just a few months from completing his mission when a bus hit him in Sao Paulo, Brazil, putting him in a coma. His parents were told Elder Schenk would not survive. "They had told us that there had been no blood or oxygen supply to his brain, so we were going to the hospital to tell him goodbye," Britten's mother, Karla Schenk, told KSL.

But Elder Schenk not only survived, he went on to live a life that inspires others. On a blog that details his miraculous journey, his family wrote in October 2013:

Two weeks after speaking at the lock down facility, Britt received a big envelope in the mail containing letters from many of these boys. Britt was thrilled as he opened them and read each one individually.

You have inspired me to expand my beliefs and learn to appreciate the gift of living, as well as what the Father has done for us. I want to thank you for showing me that it is okay to trust, as well as being a forgiving person. You have taught me to see the light at the end of the tunnel and have faith in others."

I learned a lot from your story including how to forgive. When I return home, I plan to be baptized into the LDS church. Your story just reconfirmed my faith.


Britten has accepted his "new life" and has found happiness in it. He finds happiness everyday as he lives his life the best he can, and share's that same happiness with all those around him. . . .

When we arrived in Brazil on March 20, 2012, we were told that Britten wouldn't survive, there was nothing they could do for him. But through divine intervention, acknowledged by doctors and most of those involved, we witnessed a miracle!

For Steven and I, it was as if the Lord said, "Elder Schenk, take up they bed and walk...thou hast unfinished work to do."

We are grateful that Britten has been able to carry on the work that he so loves, and lift those around him as he shares his story of hard work, determination, positive attitude, hope, faith and miracles.

In 2014, Elder Claudio R. M. Costa, president of the Brazil area, told the Schenk family, "Brazil needs to see [Britten's] miracles, and it would help so many!"

On March 16, 2012, Elder Britten Schenk was about 21 months into his mission for The Church of Jesus Christ of Latter-day Saints, just three months shy of returning home, when he and his companion prepared to cross a busy street in Sao Paulo, the ninth-largest city in the world. With their view blocked by a large post, his companion paused as Britten stepped into the street. A bus traveling at an estimated 30 mph struck Britten solidly on the left side of his head. Taken to a nearby hospital, Britten lapsed into a coma as his parents scrambled to first get a travel visa, then catch a flight to Sao Paulo.

The news they received when they arrived at the hospital was not good. “There’s nothing we can do for him. He will not survive,” one doctor pronounced. Surgeons placed him in a medically induced coma and removed the left side of his skull to release pressure from swelling. Later, the neurosurgeon told his parents he would survive but have limited mental capacity -- maybe 10% if they were lucky. He fought off dangerous infections and pneumonia. After a month in a Brazilian hospital, he was flown to University Hospital in Salt Lake City where he spent seven more weeks before returning home. To everyone's surprise, he continued to get better.

Along the way, the list of what the family considered to be miracles lengthened. Surgeries had been expected on the multiple small bones that had been broken or displaced in Britten’s face. Amazingly, they healed on their own and returned to their proper positions. Another surgery was in the works to correct the 40 percent hearing loss he suffered after the accident. Two months later, his hearing tested normal. One neuroopthomologist examined one of Britten’s MRIs not long after the accident and said, “When I look at your MRI, I can’t even see how you’re walking or talking.”

He had to relearn many things --like how to talk-- and, today, it's almost impossible to tell that his skull was basically rebuilt including a large titanium plate that replaces the part of his skull that was crushed beyond repair. Blind in one eye and 75% blind in the other because of nerve damage, he managed to finish an Associates Degree at Utah State and, this coming July, will graduate with a degree in massage therapy with a job already lined up with a chiropractic practice in the Logan area. He is even optimistic that a friendship with a very special young woman might even be blossoming into love.

Like tens of thousands of people around the world, when Britten's accident made the news, I prayed nightly for him and his family. Three years ago, I flew out to Utah to run in my first -- and last 5k -- an initiative organized by the local community to raise funds to offset his expensive speech therapy lessons. I've stayed in touch regularly with him these last five years and, tonight, we talked about school, careers, marriage and family--the typical things that are on the minds of guys his age. But, the thing is, in his case, he wasn't even supposed to live long enough to see ANY of those things come to fruition. Therein lies the miracle.

The theme of a blog the family set up shortly after the accident to keep people apprised of his progress was "the future is as bright as your faith." As I sat across the table from him tonight sharing Brazilian food, I looked into his eyes shining with hope about the future before him and realized that, when it comes to faith, he must have a whole lot of it.