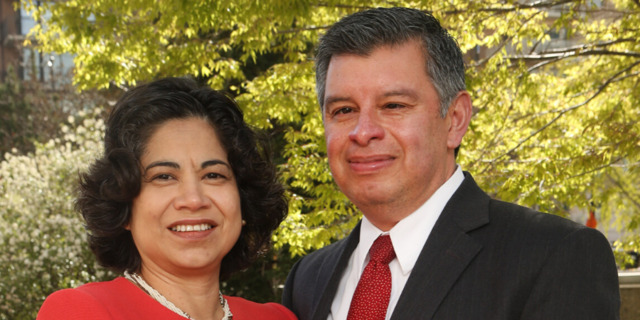 ‘He could not stop’: Why Sister Aburto's husband missed the 1990 FIFA World Cup in order to read the Book of Mormon

My husband Carlos joined The Church of Jesus Christ of Latter-day Saints in Mexico, together with his family, when he was nine years old. Due to various circumstances, most of his family did not remain active in the Church. However, Carlos did not forget how he felt when the missionaries visited his childhood home.

Years later, at age twenty-three, he moved to the United States and lived with his brother. They were occasionally visited by members and missionaries, and they kept in their apartment a copy of the Book of Mormon, which, for a long time, basically just gathered dust.

When Carlos was twenty-seven years old, he broke up with a girlfriend, and felt devastated. He then remembered how he had felt in his childhood when the Holy Ghost testified of the truth of the gospel of Jesus Christ to his young heart. He finally reached up to the Book of Mormon and opened it. As he started reading, something amazing happened: he could not stop. Back then, he had two jobs and not much spare time, but instead of eating during his breaks, he continued reading the Book of Mormon.

An interesting detail about Carlos’s story is that all of this happened when the soccer extravaganza of the 1990 FIFA World Cup was going on. Those who know my husband well know how much he loves and enjoys soccer, and how important this every-four-year event is to him. Nevertheless, he completely ignored the World Cup because he was captivated by the Book of Mormon so much that he finished reading it in two weeks with the little spare time he had.

He has said to me: “As I started reading about Nephi and his family, I immediately related to him because I always tried to be the peacemaker in my family whenever there were conflicts (which, by the way, happen in every family). Nephi had a sincere desire ‘to know the things that [his] father had seen, and believing that the Lord was able to make them known unto [him, he pondered in his] heart’ (1 Nephi 11:1). Because of that honest desire, Nephi received his own witness of the reality of the Lord Jesus Christ and saw a vision that prepared him for what lay ahead. Somehow, I knew that the same thing could happen to me on a personal level.”

Carlos continued: “I felt that every invitation to repent was given to me personally. The words of Nephi, Jacob, King Benjamin, Mosiah, Abinadi, and all the prophets in the Book of Mormon, and their witness of the divine mission of Jesus Christ, touched my heart in a profound way. As I read how Alma the Younger described his anguish as he remembered his sins, I felt the same way. My soul was tormented with pain. Similarly, when I read of the joy that Alma felt as he remembered ‘to have heard [his] father prophesy unto the people concerning the coming of one Jesus Christ, a Son of God, to atone for the sins of the world’ (Alma 36:17), I was overwhelmed with joy and the hope that I could also be forgiven.”

► You may also like: How Sister Aburto found healing from both sides of the veil after tragedy

As Carlos read the Book of Mormon, he had a change of heart and became a new man. He came back to church every Sunday, again renewing the covenant he had made in his childhood. By that simple act of faith of reaching up to the Savior by reading the Book of Mormon, he discovered a whole universe of truth and light in his life.

Something similar happened to me when I was twenty-six years old. I vividly remember the feelings of peace and comfort that I had as I followed the missionaries’ invitation to start reading the Book of Mormon. At that time, a recurrent promise from the Lord found in the book stood out to me: “Inasmuch as ye shall keep my commandments ye shall prosper in the land” (2 Nephi 1:20). I had never heard that concept before in my life! What a beautiful promise! The Lord is assuring us that if we are obedient to His commandments, we will be blessed and prosper, both temporally and eternally.

Does that mean that we need to be perfect? No! We do not have to be perfect in every aspect of our life! We just need to have a sincere desire to know and to obey, like Nephi or like Carlos did. What needs to be exact is our desire to obey. If we strive to be obedient, through the Holy Ghost we will receive assurances from the Lord that He is pleased with our efforts. Please remember His promise: “Inasmuch as ye shall keep the commandments of God ye shall prosper in the land; and ye shall [not] be cut off from his presence” (Alma 36:30; see also Alma 37:13).

Drawing upon her unique life experiences, Sister Reyna Aburto invites readers to join with her in strengthening Christ's Church. Through her relatable style and humble approach, Sister Aburto shares her insights about growing up in Nicaragua, losing her brother in a devastating earthquake, having a spouse struggle with addiction, dealing with divorce and single parenting, joining the Church, and developing a deep conviction of the Savior's love and the transcendent power of His atoning sacrifice. Each chapter addresses a specific way we can reach for the Savior, from studying the Book of Mormon to temple worship to strengthening our wards to ministering and more. Through trials and difficulties, personal darkness, and mental and emotional struggles, we can find small and simple ways of drawing closer to God in Reaching for the Savior. Available now at DeseretBook.com.