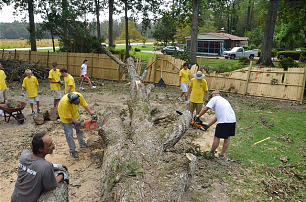 A photojournalist who covered the Sept. 3 Church-sponsored service project that was organized to help folks impacted by Hurricane Irene in eastern North Carolina learned first-hand of the generosity of the Tar Heel State's service-minded members.

The man was accompanying a local Church public affairs specialist on a tour of the various work sites. After finishing his work, the photographer pulled the member aside and mentioned that he had four felled trees in his own yard, then added that he'd been so busy covering the hurricane that he didn't know how or when he would be able to clear the debris. A short time later a dozen men from the Durham North Carolina Stake arrived at the man's front door, told him they were there to help and commenced to clear the trees from his yard.

With tears in his eyes, the photographer pointed to the Durham men sporting yellow "Mormon Helping Hands" T-shirts and said, "Those are men of God. They are doing the Lord's work."