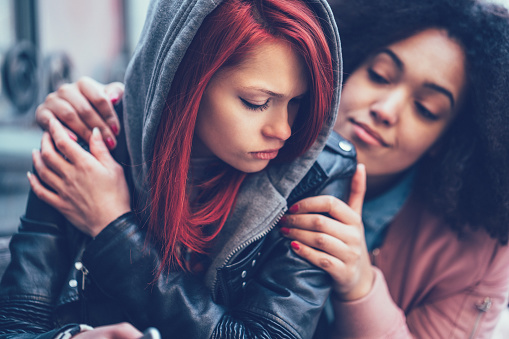 "Her Soul Had Been Kidnapped from Her": Mother and Daughter Share Honest Insights Into Teen Depression

Isabela’s* depression first manifested as anxiety, hitting during her seventh-grade year of school. Her mom, Luiza,* remembers it coming on suddenly. The only signs that anything was off-kilter masked themselves as the typical worries and changes that accompany the move to middle school and making new friends. One day Isabela seemed fine, the next, “I really felt like her soul had been kidnapped from her,” Luiza says.

“All of her ability to experience joy and happiness and laughter and pleasure was gone, had been taken away. She had none of that any longer. All that was left was the part that could experience fear and terror and anxiety and sorrow and pain and suffering and sadness. . . . She was so sensitive, both physically and emotionally, to anything around her. It was as though you had burned off her skin. Everything was painful. Everything was difficult, and so she just spent hours crying and despondent.”

Today, Isabela is an adult. That out-of-the-blue tornado of anxiety and depression struck fifteen years ago. She describes herself before that time as a cheerful, happy kid. “There had been no sexual assault, no abuse,” she says. “I had good parents and a safe place to live, and there was always food on the table. Lots of love and acceptance.” Like physical diseases—cancer and diabetes, for example—depression in children and teens can sneak up suddenly, often silently. Changes in mood, irritability, and anger can all initially be attributed to something else: puberty, hormones, PMS, troubles at school or with friends. It’s not unlike the headaches, fatigue, and weight loss that are brushed off as stress related or just part of life in general before the words cancer or chronic disease are uttered.

The unraveling that is depression can come on swift and strong. “In the depths of my depression,” Isabela says, “I had moved into the basement of our house and was sleeping on a mat and was not eating anything and did not want to leave the house. I did not want to see any friends. I was not sleeping well and I felt like there was no point to any of it, that nobody liked me. . . . Strangely, a small part of me recognized that this was not normal, but the overwhelming part of my brain was telling me that there was no purpose to anything. I remember really wanting to sleep until the pain went away. I didn’t want to kill myself. . . . I wanted to just sleep and never wake up until I was better.”

A few months after my interview with Isabela and her mom, they found a journal Isabela had kept during that time of illness. Despite the years that have intervened, it is still painful to read the words: one huge letter per page, spelling out “I hate myself.” As a middle schooler, Isabela felt particularly vulnerable. Despite being in treatment, she simply didn’t feel like she could go back to school after this first episode. What would the other kids think? Would they say she was crazy? Would they mock her? Bully her? What would her teachers think? Would they doubt her intelligence? Would they treat her differently? She missed an entire year of school, adding another discouraging complication to treating her disease.

Suddenly, happiness and success seemed out of reach. Luiza says they felt like they needed to hold a funeral for Isabela to mourn the parts of her that were gone and might never come back. All of the good parts of her seemed lost. It stretched credulity to think she might ever go to college. “All of a sudden it went from where I was thinking she had such a bright future and she was so capable and so loving and lovable and wonderful and I could imagine so many good things for her . . . to wondering whether she would survive or whether she would be able to graduate from high school,” Luiza says.

A breakthrough occurred when a phenomenal therapist trained in cognitive behavioral therapy began working with Isabela. Their personalities clicked, and Isabela began improving. Antidepressants and antianxiety medications also played a role in recovery. Finding the right medications and the correct dosage took time, as did continued involvement with a psychiatrist and other mental-health specialists.

Of course, during this time of slow and gradual improvement, life at home had to continue. The families of those who suffer from depression can’t simply stop carrying on with their lives. Parenting takes on a whole new dimension when a child is afflicted with depression. Financial and logistical constraints can mean fewer opportunities for parents to connect with their children who aren’t depressed. And the eggshells parents often traverse in dealing with depressed teenagers become increasingly fragile. For Luiza, it was a balancing act. She had to learn when to soothe and when to be more demanding, when to insist that Isabela practice what she’d learned in therapy or to simply require her to come up from the basement and participate in family life.

Today, Isabela gratefully reflects on her parents’ devoted efforts. She remembers one of her initial visits to a psychiatrist that almost didn’t happen because she refused to leave the basement. “They made this appointment,” she says, “with the psychiatrist and I said, ‘I’m not going.’ My dad just physically picked me up and carried me to the physician’s office, and I spent that office visit sitting in the corner crying and not talking to her at all.”

It was a low point for Isabela, but she continued therapy, sometimes only because her parents forced her to, and her health improved. For her parents, when to insist and when to let something go was a matter of guesswork. The one thing that became nonnegotiable, however, was being honest with themselves and their children about what they were facing, and then facing it head-on. Experts recommend full disclosure with children when one of their siblings suffers from a chronic illness, including depression. Dr. Esther Dechant of McLean Hospital and Harvard Medical School says not to pretend everything is okay in an attempt to “protect” the other children. “Kids instinctively know when something is wrong with a sibling and will have many questions,” she says. “Not talking about it will only make them wonder more, which can cause anxiety and fear as their imaginations run wild with possible answers. Talking openly about their sibling’s depression . . . inviting them to ask questions and share their feelings . . . will not only reassure them that their sibling is being helped but will also destigmatize the illness.”

Dr. Dechant also recommends keeping a close eye on siblings. “Everyone in the family will be affected in some way when a child is battling depression. ‘Healthy’ children may feel ignored, anxious, or confused. Individualized attention, or even professional counseling, can help them understand and manage their feelings about the situation.”

Finally, it’s important for parents to take care of themselves and, particularly, to avoid the blame game. When abuse and neglect are not in the equation, parents are not to blame for a child’s mental illness. A child is never to blame for having depression. Floundering in the thick fog of depression, it’s often difficult for sufferers not to feel guilty, blame themselves, and feel entirely abandoned.

The resources—physical, financial, emotional, and spiritual—of families with a child, or children, suffering from mental illness are often stretched exceedingly thin. Many parents describe extreme strain associated with even the most pragmatic aspects of their children’s illness. “I made thirty phone calls and two of them returned my phone call and said, ‘I’m sorry, we’re not taking new patients.’ It just became a real struggle to even try to find a provider. I felt like my kids were just completely crashing while I was trying to muddle through paperwork,” one parent told me.

The worry is unrelenting when a child has a life-threatening disease. As members of the Church, we must be on the lookout for those within our congregations and communities who are coping with these exhausting demands. From bishops and Relief Society presidents to quorum, Primary, youth, and Sunday School leaders, as well as friends and neighbors, there is much that the watchcare and ministering of a Latter-day Saint ward can do to aid families fighting this multifront war.

Isabela says she never felt abandoned by God, but she did feel very distant from Him. In moments of clarity, she remembers hoping Heavenly Father knew she was working on things. She recognized that the usual Sunday School answers—say your prayers, read your scriptures, go to church—might not “fix” her, but that didn’t mean she was unrighteous or had sinned. “Mormons are doers,” she says. “We are fixers, and there is a sense that we are supposed to be moving towards perfection and godliness. But depression just does not . . . I think depression prevents you from being able to do a lot of the things that others do.”

Isabela is on the other side of the darkness; her illness is managed for the time being. She is a beautiful, compassionate, and newly married young woman with increased empathy for others who suffer. She was able to finish college and get a good job. Her illness has very little impact on her life today. Isabela wants people to know that depression doesn’t define you and that you’re still a beloved child of God even if, for a time, you can’t feel His love. She’s learned a lot about the stigmas that surround mental illness and why it’s so hard to help someone who is suffering from depression. “Members of the Church like to check boxes,” Isabela says. “We [pay] tithing and do our visiting teaching and check the box that says ‘I paid my fast offerings and I helped clean the church on Saturday and I went to institute and I gave a ride to the young woman in need. . . . I cooked a meal for someone who had a baby.’ It’s hard to check a box for depression. It’s hard to figure out what you need to do to check a box, to help someone with depression, partly because everyone’s situation is so different and partly because it’s kind of scary and unknown.”

* Name has been changed. 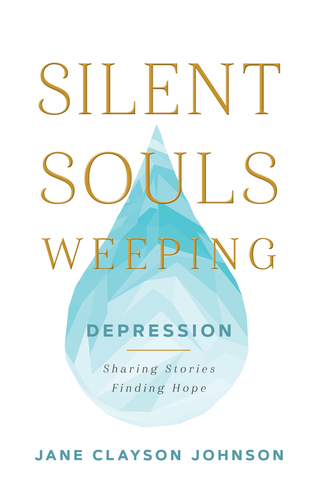 Through the power of story, nationally recognized journalist Jane Clayson Johnson shines a light on the desperate, dark, and lonely reality faced by those who struggle with clinical depression. At once hopeful and heart-wrenching, Silent Souls Weeping examines the stigma and isolation associated with depression, as well as the dangers of perfectionistic tendencies and suicidal ideation.

Beginning with an open and frank exploration of her own experience with clinical depression, the author goes on to share stories gathered from interviews with more than 150 men, women, and teens—all members of The Church of Jesus Christ of Latter-day Saints—who have suffered from depression.

Within these stories is a plea to change the dialogue surrounding depression, particularly among Latter-day Saints, who face unique struggles as they try to fit a disease manifest through sorrow into a religion centered on a "plan of happiness."

"The worst part of depression," writes the author, "is the profound isolation it engenders, not just from the Spirit but from family, friends, and community." Sharing our stories is the first step toward ending that isolation. This important book opens the door for a new level of honesty and helpfulness, both for those who suffer from depression and for their family members, friends, and Church leaders.