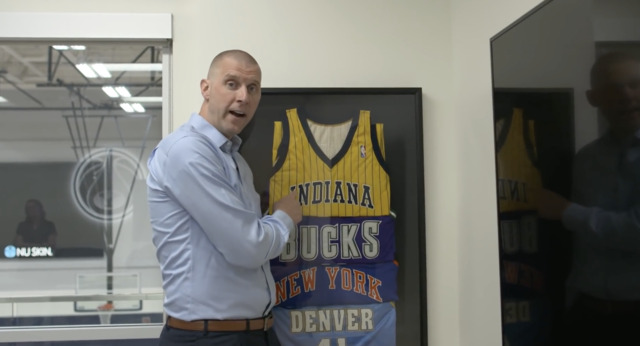 Latter-day Saint Mark Pope was an NBA rookie playing for the Indiana Pacers when his team, coached by NBA legend Larry Bird, faced Michael Jordan and the Chicago Bulls in the 1998 Eastern Conference Finals. The series, including Reggie Miller’s game winning shot to tie the series, was recently documented in The Last Dance ESPN documentary.

Sports Illustrated interviewed Pope, who just completed his first season as BYU Men’s Basketball coach, about playing in the series and Pope recalled a moment of gratitude he experienced in the locker room before Game 7 in Chicago.

“We are in the locker room before the game and Coach Bird, it’s his rookie season as a coach, maybe the smartest most intuitive player to ever play the game and he’s doing his pre-game and he starts bawling… because he wanted it for us so bad,” Pope said.

While Pope played limited minutes that season and is frequently critical of his NBA career, he has had an impressive showing at BYU thus far. In his first season, the Cougars finished 24-8 and finished 2nd in the West Coast Conference. Pope has also demonstrated strong recruiting abilities landing several big recruits during the off-season and just this week, BYU made the top seven schools for highly touted Georgetown transfer Mac McClung. Pope may not still be sitting courtside with two of the NBA’s most legendary but his life is certainly still looking pretty good.