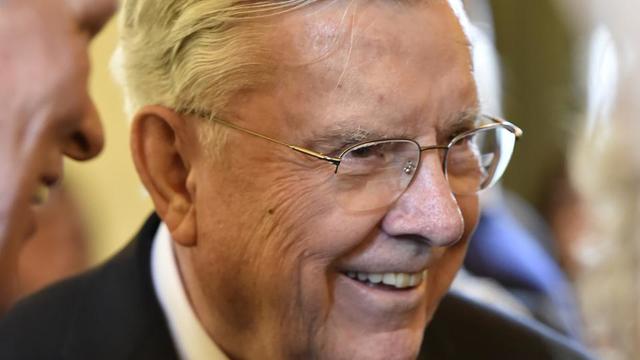 byPresident M. Russell Ballard, excerpted from "Our Search for Happiness" and "When Thou Art Converted" | Apr. 12, 2018

The following stories were excerpted from Our Search for Happiness and When Thou Art Converted.

The sun was about to set on another hectic Sunday in 1948 during my first mission for The Church of Jesus Christ of Latter-day Saints in Nottingham, England. I had just concluded a successful street meeting with other missionaries in the area, during which we shared our message with passersby on Nottingham Square.

"What makes you Americans think you can come here and teach us anything about Christianity?" one gentleman had asked.

It was a common question, and a legitimate one in my view. Unless we could offer people spiritual insights and understanding they couldn't receive anywhere else, there really wasn't much reason for them to listen to us. Thankfully, we had just such a message—one unique and laden with eternal significance—and I was pleased to be able to so testify to the gentleman who asked the question. We had a lively, interesting discussion, and I felt the spirit of the Lord with me as I taught the message of the gospel of Jesus Christ.

Coming to Know, Not Just Believe

I was still feeling that same spirit at dusk as I walked home along the shores of the Trent River. It had been a long day, not discouraging but exhausting, filled with meetings and ministering which were associated with my assignment as a leader among the missionaries and members of the Church in Nottingham. I heard the soothing sounds of the river flowing downstream as I walked, my lungs filled with the dank, heavy air of England. I was thinking about the missionaries for whom I was responsible, as well as the Latter-day Saints in Nottingham who looked to me—a 20-year-old American—as their leader. And I was thinking about that gentleman and the question he posed and the heartfelt testimony I presented in response.

As I strolled along the Trent, weary and yet happy and satisfied in the work, an overwhelming feeling of peace and understanding came over me. It was at that precise moment in time that I came to know that Jesus Christ knew me, that He loved me, and that He directed our missionary efforts. Of course, I'd always believed those things. They were part of the testimony I had shared just a couple of hours earlier. But somehow in that instant of what I realized was pure revelation, my belief turned into knowledge. I didn't see any visions and I didn't hear any voices, but I could not have known of Christ's reality and divinity any more intensely had He stood before me and called out my name.

My life has been shaped by that experience. From that day to the present, every significant decision I have made has been influenced by my knowledge of the Savior. I couldn't, for example, entertain certain professional opportunities because they didn't represent the way Jesus would have done business. We have tried to base important family decisions on the Lord's will for us—whatever that may have been. Even personal relationships have been built on a foundation of love, our love for Christ and His love for us.

That's the way it is when Jesus Christ becomes a reality in your life. It isn't that He somehow makes you do things that you wouldn't do otherwise. Rather, you find yourself wanting to do what He would do and respond as He would respond in an effort to bring your life into harmony with His. And an interesting thing happens whenever you attempt to place your feet in Christ's footsteps. If you really concentrate on trying to walk the way He walked—loving, caring, serving, and obeying each step of the way—one day you'll look up and discover that His path has led you directly to the throne of God. For that is and ever has been His great purpose and mission: to lead us to our Heavenly Father so we can dwell with Him in His heavenly home.

Shortly after I was called to the First Quorum of the Seventy, a solemn assembly was held in eastern Canada for all of the priesthood leaders. The First Presidency, one of the Twelve, and one of the assistants to the Twelve traveled to Canada to participate. It was a glorious experience. As the mission president in Toronto, I had the responsibility for making many of the arrangements.

At the end of the solemn assembly, we had a light dinner for the Brethren, and then I drove the First Presidency to the hotel where they were staying. I might mention that I have never driven more carefully in all my life than when I had such precious cargo in my car.

When we arrived at the hotel, the Brethren bade me good night and went to the ninth floor. I noticed that President Spencer W. Kimball's secretary, Arthur Haycock, had been detained in the lobby, so I went over and asked him if I could take the key up to President Kimball so that he might get into his room. He appreciated my offering to do that and handed me the key. I took the elevator to the ninth floor and went down the hall. There, standing in the doorway, were President Kimball and President N. Eldon Tanner. As I approached them, I said, "President, here is your key. I thought I'd bring it up to you so you could get in and have a good night's rest."

He thanked me for that in his loving way. Then President Tanner took my arm and said, "Russ, how would you like to come in and have prayer with us?" Of course, I had never had that experience before and gratefully accepted his invitation. I went into President Tanner's room with him and President Kimball. A moment or two later, President Marion G. Romney and the other Brethren came in. I was overwhelmed. I have to tell you that tears welled up in my eyes as we knelt down around that bed.

I was kneeling next to President Tanner when President Kimball said, "Eldon, this is your room. Who would you like to have pray?" I think President Tanner sensed what was happening to me, for he said, "President, we would like you to pray." And then I heard a prophet pray. I would like you to understand that I learned a great lesson in that prayer. I felt the Spirit as I had never felt it before—you can understand it—for when a prophet talks to God, it is close friends speaking. From this special experience, my testimony of the reality of God our Eternal Father and His Beloved Son, the Lord Jesus Christ, was greatly increased, and I knew I had listened to their prophet on earth pray.

In President Kimball's short but humbly sincere prayer, he said this, among other things: "Heavenly Father, we pray above everything else that the labors of this day have been acceptable unto Thee." That penetrated my heart like nothing else ever has on the principle of prayer. Oh, that every one of us might always be found closing the day pleading with the Lord that the efforts of that day had been acceptable unto Him! There is great power in that. There is great strength in understanding that He is our Father, that we are His sons and daughters, and that we are on a journey through mortality that is essential to His plan for our eternal happiness and joy. 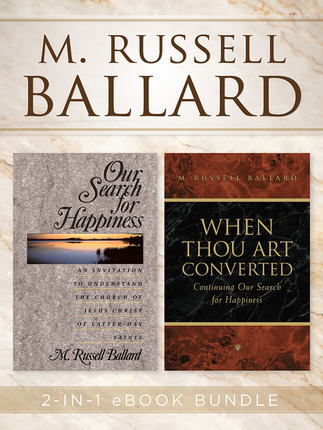 For more profound truths from President Ballard, check out this ebook bundle of two of his classic books, Our Search for Happiness and When Thou Art Converted.

In Our Search for Happiness and its follow up, When Thou Art Converted, Elder Ballard shows us that we manifest our belief in Christ and our acceptance of Him as our Savior by the way we live our lives. The most important way we “stand as witnesses of God at all times, and in all things, and in all places” is in the daily choices we make.