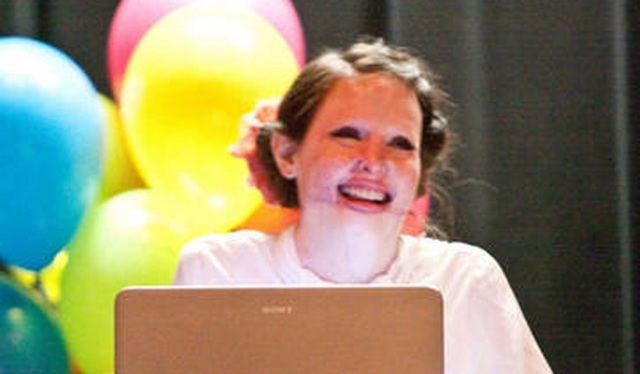 "I Saw God in My Eyes:" Stephanie Nielson Shares How She Found the Will to Live After Burning 80 Percent of Her Body

MR says: There was a time Stephanie Nielson thought she was a monster--that she would have been better off if she had died in the plane crash that burned over 80 percent of her body. But then, the love of her Savior and the knowledge of her divine worth changed how she saw the world and her place within it.

On Aug. 16, 2008, a plane crash left Stephanie Nielson, then a mother of four, with burns covering more than 80 percent of her body. She was 27 years old.

Just over seven years later, Nielson, now a mother of five, offers a powerful message of faith, hope and courage.

Nielson, who gained notoriety from her popular blog "Nie Nie Dialogues," shared her message Thursday afternoon at Utah Valley University. Students and members of the community filled the Grande Ballroom to capacity. In his opening remarks, UVU President Matthew Holland said he was “blown away by the turnout.”

Nielson began by expressing her love of motherhood. She married her husband, Christian Nielson, in 2000 and had her first child 10 months later.

"We continued to have children, and it felt right," she said.

At the time of the accident, Nielson had been married for more than seven years and had four children, ages 6, 5, 3 and 18 months.

She described her first thoughts after the plane crash.

“I was in so much pain and so much fear … and then my mind raced to my children," she said. "I couldn’t imagine that would be the end.”

Find more incredible insights from Stephanie Nielson in her book Heaven Is Here.

Based on her immensely popular blog, Stephanie Nielson's inspiring memoir explores how, in the wake of a near-fatal plane crash, she comes to embrace, more than ever before, the power of love, motherhood, community, faith, and the simple joys of everyday life.