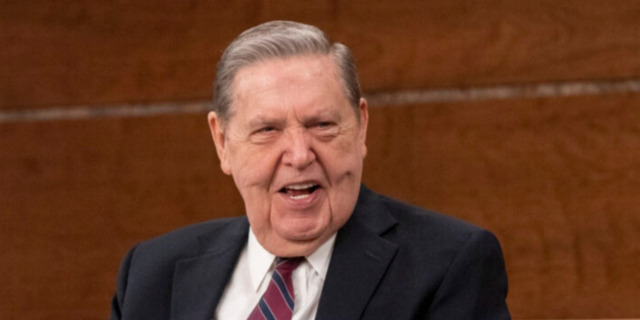 ‘I had to have something in the tank’: Elder Holland addresses the importance of self-care

When Elder Jeffrey R. Holland goes out into the field as a leader of The Church of Jesus Christ of Latter-day Saints, he said there is one question that frequently comes up: How should one care for their own mental health and emotional well-being?

The question was posed again during a question-and-answer session as part of “The World’s Principled Leader Series” presented by the Covey Leadership Center at the Jon M. Huntsman School of Business at Utah State University.

At the conclusion of his remarks, Lord Michael Hastings of Scarisbrick, England, posed some questions to Elder Holland which had been submitted by students about leadership. One student asked how to care for one’s own mental health and emotional well-being when there are so many opportunities and so much to accomplish.

Elder Holland responded that there are always more demands on our time than the clock provides for. He said that his time in graduate school was one of the most demanding on him as he didn’t have much money, but did have two little children, was teaching half-time, going to school full-time, and holding a major position in the Church.

► You may also like: ‘There’s no such thing as balance’: Elder Bednar shares an object lesson you may need right now

Elder Holland said he decided it wasn’t selfish to do a few basic things, like eating right, getting in a little exercise, and being spiritually in-tune, that enabled him to be a better spouse, father, and student. He said taking the time to pray instead of hurrying out the door can make the difference in a day.

“A little personal attention in the midst of all of the other external demands, for me, has been a key for the nearly 50 years since then, and I still try to practice that,” Elder Holland said. “You can’t spend a lot of time, but the quality of what you do can be high in terms of your own spiritual and emotional and physical renewal. Then do the best you can with some of the other things and some of the things might have to wait. We might have to say, ‘Can’t do that today, we’ll do that tomorrow.’”

Watch Elder Holland’s full remarks on YouTube or find a summary of his remarks at Church News.