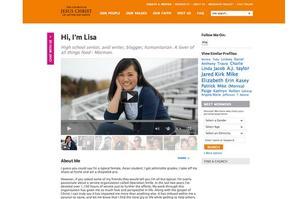 The Church of Jesus Christ of Latter-day Saints is going big in the Big Apple.

The church launched a new phase of its "I'm a Mormon" campaign in New York City this week. The campaign includes a large electronic billboard in Times Square, a block from where the satirical Tony-Award winning musical "The Book of Mormon" is showing.

The church is also putting advertisements on top of cabs, inside cabs and inside subways.

"When my mission president announced the campaign last week there were actual cheers by the missionaries," said Elder Aldridge, an LDS missionary in New York City. "We're pretty pumped and definitely excited about the campaign," added his companion, Elder Kinikini.

Even before these new advertisements, publicity intended primarily to promote "The Book of Mormon" musical boosted missionary efforts. "We go to one neighborhood and people recognize us more and say, 'There's the missionary poster guy! Didn't they make a musical about you?'"

The elders also reported that missionaries are seeing the first signs of the campaign. One of their colleagues saw an "I'm a Mormon" ad on top of a cab just yesterday.