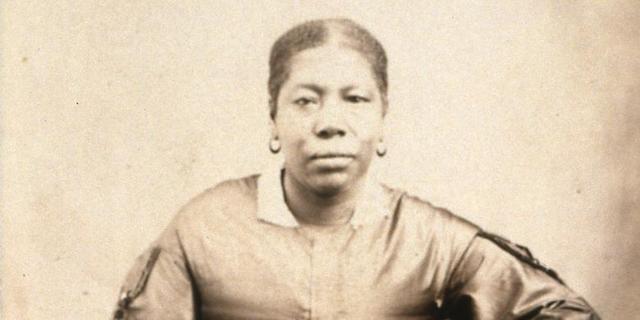 "Is There No Blessing for Me?" The Incredible Conversion and Life of Jane Elizabeth Manning James

Shuffling through dirt and mud, stumbling over cold stones that rubbed their skin raw, Jane Elizabeth Manning James and her family inched toward Nauvoo, Illinois, barefoot. It was 1843; James was one of the first black converts to the Church and lived in a time where some people saw her as property first and a human being second.

That was the very reason James and her six family members were walking 800 miles to Nauvoo in late fall with shoes that had long since worn to useless strips.

While journeying with Charles Wesley Wandell, the missionary who had baptized James in her home state of Connecticut, James and her family were denied passage on a boat in New York.

As James writes in her autobiography: "We were to go to Columbus, Ohio, before our fares were to be collected, but they insisted on having the money at Buffalo and would not take us farther" (James Goldberg, "The Autobiography of Jane Manning James: Seven Decades of Faith and Devotion," 11 December 2013, history.lds.org).

Left with the two options of transversing hundreds of miles on foot to Nauvoo or returning home to Connecticut, James chose the former, though it was no easy, leisurely journey.

"We walked until our shoes were worn out, and our feet became sore and cracked open and bled until you could see the whole print of our feet with blood on the ground," James says in her autobiography.

But making difficult decisions and following God no matter the cost wasn't limited to this one journey. It was what Jane Elizabeth Manning James did. It was who she was.

Against the advice of her Presbyterian pastor, James listened as Wandell shared the gospel in the winter of 1842–1843. Admitting in her autobiography that she "did not feel satisfied" with the Presbyterian church she had belonged to for 18 months, James was baptized just one week after hearing one of Wandell's sermons, being "fully convinced that it was the true gospel" (James Goldberg, "The Autobiography of Jane Manning James: Seven Decades of Faith and Devotion," 11 December 2013, history.lds.org).

Sometime after her conversion, James also had a vision where she saw Joseph Smith, a man she had never met and only heard of. Yet in this dream, James was certain of one fact: this was a prophet of God.

About three weeks after her baptism, James had further confirmation that the gospel was true when she received the gift of tongues. Not to be confused with xenoglossia, or the gift of tongues of different human languages, James's gift was most likely glossolalia, or the gift of unknown languages. This gift was not unheard of among members at this time in the Church's early history, but it wasn't an everyday occurrence, especially for those who weren't Latter-day Saints. As James says, "the gift of tongues came upon me and frightened the whole family who were in the next room" (James Goldberg, "The Autobiography of Jane Manning James: Seven Decades of Faith and Devotion," 11 December 2013, history.lds.org).

However unusual, James would need these powerful experiences. Nearly a year after her baptism, James and her family, who also converted, would be faced with an enormous trial. A trial that would no doubt shape their testimonies and strengthen their faith through incredible adversity.

Making the decision that she and her mother, her two sisters, her two brothers, her sister-in-law, her brother-in-law, and her son would make the 1,000-mile plus journey to be with the Saints, James and her family set out for Nauvoo with Wandell and a few others in the fall of 1843.

But once they reached Buffalo, New York, they were refused passage on a boat. Leaving their luggage, which included all of James's worldly possessions, with Wandell who was to see it safely transported to Nauvoo, the family began their long journey across a sea of literal stumbling blocks.

When their shoes wore out from the enormity of the trek and their feet bled, James didn't turn back. But there wasn't much they could do. Carrying only the clothes on their backs and few, if any, supplies, James and her family didn't have any permanent solution to replace the shoes. Paired with the threat of snow and colder weather, stopping and waiting for their feet to heal would've made the risk of unfavorable weather too high.

But they still had God.

"We asked God the Eternal Father to heal our feet," James says, revealing that, through their faith, "Our prayers were answered and our feet were healed forthwith" (James Goldberg, "The Autobiography of Jane Manning James: Seven Decades of Faith and Devotion," 11 December 2013, history.lds.org).

It was a miracle to be sure, but their hardships were far from over. When the group reached Peoria, Illinois, they were accosted by men demanding to see their "free papers." Except for James's mother, no one in their band had ever been slaves and they had no idea what these men meant. But at the time, certain states insisted that all black men and women provide "proof" they weren't runaway slaves, though sometimes that wasn't enough to ensure their safety. However, after threatening James and her family with imprisonment, the men finally let them go.

But the seed of fear had been planted in the minds of James and her family. This was the Antebellum era. Tensions were high among abolitionists and those who supported slavery. Passages from the Bible about Cain were routinely used to justify the unspeakable cruelty of slavery and treatment of African Americans.

So James and her companions did not tarry in the area. In their haste to get away from Peoria, James and her family crossed a river with no bridge, the water swirling up to their necks. Once across, they walked in the autumn chill into the night until, mercifully, they found a log cabin where they could stay the night.

There was no denying the changing seasons, but it was gratitude, not fear that James and her family expressed as they left the log cabin.

"[The] next day we walked for a considerable distance and stayed that night in a forest out in the open air," James shares. "The frost fell on us so heavy that it was like a light fall of snow. We rose early and started on our way, walking through that frost with our bare feet, until the sun rose and melted it away. But we went on our way rejoicing, singing hymns, and thanking God for his infinite goodness and mercy to us in blessing us as he had, protecting us from all harm, answering our prayers and healing our feet" (James Goldberg, "The Autobiography of Jane Manning James: Seven Decades of Faith and Devotion," 11 December 2013, history.lds.org).

The next town where the group stopped, La Harpe, Illinois, was only 30 miles from Nauvoo. But while there, James and her family encountered another miraculous healing. A child in the town had fallen seriously ill, so ill that the elders in that town were certain the child would die. But James and her family "administered to it and the child was healed."

It's unclear how James and her family administered to the child, but it wasn't the only time James had healed someone. While speaking to a group of Relief Society sisters, James shared that she had once healed herself.

"She [Jane] had been terribly afflicted in her head, and she took her consecrated oil and anointed herself and she was healed. Felt that that was faith, and praised the Lord for her blessings" (Lydia D. Alder, “Ladies’ Semi-Momthly [sic] Meeting,” Woman’s Exponent, December 15, 1896).