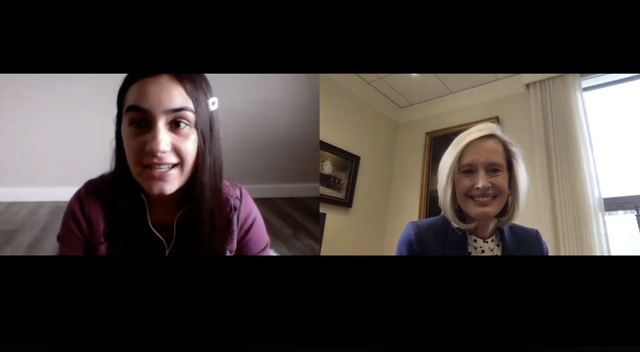 "It's His Talk": President Cordon Interviews the 18-Year-Old Who Spoke in Conference

Most of us were surprised to see two teenagers speak in general conference. It had been decades since a young man or a young woman had taken the pulpit so what does an 18-year-old girl do to prepare for a conference talk? Was she nervous at the pulpit when she stood to speak? Laudy Kaouk talked with President Bonnie H. Cordon, Young Women General President, about how she prepared for a talk she knew would be watched by millions all around the world.

She first thought about how the priesthood has blessed her life and went to the temple often to ponder. She wrote questions on her mirror and two months later found that she was able to answer the questions. She used the answers she felt she had received in her talk.

President Cordon said Kaouk’s experience is a microcosm of what many of us experience over the course of our lives as we seek to receive personal revelation, “You can write that question on your mirror and sometimes in two weeks or two months or two decades you have the answer,” she told Kaouk.

► You may also like: Is This the First Time Youth Have Spoken at General Conference?

Although she was nervous in the days and weeks leading up to her talk, Kaouk said President Jean B. Bingham, Relief Society General President, told her that once she stood at the pulpit she would feel like she had stepped into a bubble and Kaouk found that to be true. President Cordon agreed based on her experience. “You realize the Lord, it’s His talk. You just got a chance to deliver it,” President Cordon said.

Watch their conversation below.