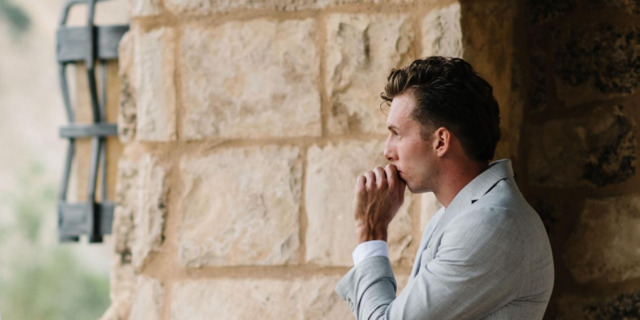 'Jesus made flowers': How learning about the Savior's attributes changed my perspective on being gay

My first taste of performing on a football field came when I was about nine years old. My family was all-in when it came to high school sports, and our community involvement led me to secure a spot as “coach’s assistant” for the high school team. I loved helping out and watching from the sidelines. Most of the time I just refilled waters or carried towels, but eventually I was given the highly coveted job of going to fetch the plastic football tee after kickoff. One cool October evening, after watching the cheer squad perform a halftime routine, I had a brilliant idea.

For the previous few weeks, I’d been obsessed with back handsprings. I had seen someone do one in my karate class, and since then it had been all I could think about. I practiced wherever I could—in the yard, on the trampoline, even in the living room. I was getting pretty good, so that night, instead of simply running to grab the tee, I decided to spice things up a little and do back handsprings across the field until I reached the center.

I felt like a certified superstar as I tumbled across the grass. I did a round-off, followed by three consecutive back handsprings—the most I had ever done. I was thrilled to hear cheers from the crowd as I picked up the little orange tee and ran it back to the sidelines. I was proud of myself, and I even got a paragraph written about me in a local newspaper that covered the game.

My fame and self-satisfaction were short-lived, however. At church the following Sunday, I was taunted by some of the kids my age. “Male cheerleaders are gay,” I overheard. “He probably just wants to be the water boy so he can be around football guys.” I wasn’t sure what they meant, or why I was being teased. I did like being around the football guys—I felt important and cool when I helped out on the sidelines. I couldn’t figure out why that was a bad thing, or why they tried to make me feel embarrassed for doing something I thought was cool. All I really knew was that a lot of the things I did seemed to be considered girly, and guys who did girly things were called gay.

Throughout middle school I became extremely self-conscious of the way I sat, how I stood, and words I used. I watched other people who didn’t get made fun of and tried to be exactly like them. Over time, I developed a list of “rules” to follow in order to fit in better with other guys around me. Don’t cross your legs, I would remind myself. People will think you’re gay. I learned to highlight my stereotypically masculine interests, such as hiking or camping, and downplay other things, like how much I loved dance and fantasy fiction novels.

There were some people I could relax around. For the most part, my family let me be authentic without too much judgment. I felt especially comfortable around my little sister Hannah, whose natural personality broke down my walls. I could always be my true self around her. We would have dance-offs before bed, watch romantic comedies, and throw impromptu fashion shows, and I never worried what she thought about me.

Society, however, taught me from a young age that femininity was gay, and gay was bad. I constantly worried about what everyone else thought of me. As I got older, I frequently felt like an outsider, especially in all-guy groups.

There was a time when I felt so out of place that I stopped going to Young Men classes at church. On the southwest corner of our building there was a small, seldom-used room. It could only fit a few chairs, was awkwardly shaped, and the chalkboard didn’t erase well. When I realized the room was empty, I started hiding in it instead of going to class.

One Sunday my older sister Janine followed me to figure out where I had been hiding. I was the kind of kid who memorized scriptures for fun and never missed a day of early-morning seminary. Skipping class wasn’t my usual style.

“Charlie? What are you doing in here? Why aren’t you in class?” she asked.

I had been sitting on the floor playing with my phone case. I didn’t say anything. I didn’t want to talk to anyone, but she sat with me for a while and told me about what she had learned in Sunday School.

“Charlie, what’s up?” she finally asked after a few minutes of failing to engage me in the conversation. Her voice was kind and free of judgment. “You can talk to me,” she said.

I tried to fight it, but I trusted her and needed to talk.

“What do you mean?” she asked, trying to mask the concern in her voice.

“You play a ton of sports,” she countered, sounding a little confused. “And you’re good. Do you not think you’re athletic enough?”

“I love sports, but not cool ones. I like cross-country and cheerleading. I like gymnastics and dance. I mean, I played basketball, but mostly just because everyone else does. It’s not like it was a huge surprise when I got cut from the team . . .” I trailed off. “It’s not about sports, though—it’s . . . it’s everything about me,” I rushed.

I told her how I got made fun of for my “girly” handwriting and for being in show choir. I explained how I felt the need to pretend like I was interested in things just so people wouldn’t pick on me. I told her how I was embarrassed of my creativity and my love for art, dancing, and decorating. I told her how I wanted to try out for the cheer squad, but I was afraid I would be mocked if I did.

“You think you are less of a man just because some seventeen-year-old bullies say you’re too feminine?” she asked.

Janine paused and thought for a moment.

“Charlie—Jesus made flowers,” she said.

“Think about the Creation—Jesus made flowers,” she repeated. “Jesus Christ, the most perfect man that has ever lived, made flowers.” Tears began to form in the corners of her eyes. “He is creative like you, Charlie. He has a sincere love of beauty, and an affinity for design. He is compassionate and kind and emotional, just like you are.”

My soul felt lighter as she spoke.

“Being a man has nothing to do with gender stereotypes, Charlie. All these things that you are embarrassed of—they make you more like Jesus. The very qualities you are ashamed of are, in fact, innate Christlike characteristics.”

Janine explained to me how femininity is divine. She used Jesus’s creation of—and biblical references to—flowers as an example to help me understand that my interests and personality were nothing to hide. She explained that masculinity had nothing to do with what sports I played, what kind of books I read, or how big I was. Being a real man was about how I used my time and talents to serve others. She taught me that, rather than define my characteristic traits as exclusively feminine or masculine, I should define them by whether or not they were Christlike.

I learned an important lesson that day, one that would change the way I viewed myself. Before that moment, I had never considered how many of the Savior’s qualities are, in our world today, considered feminine. Jesus is a perfect example of patience, empathy, understanding, and sensitivity. He is nurturing, gentle, accommodating, and emotional. He is compassionate, kind, and conscious of others. In His great and ultimate atoning sacrifice, the Savior proved to be the epitome of humility and vulnerability, both viewed as stereotypically feminine by modern society.

Scripture often refers to Christ or Christlike attributes in the female form. Throughout His earthly ministry, the Savior was known to have taken on many feminine and motherly roles. He prepared food for multitudes, washed and anointed others with oils, and suffered children to come unto Him. Christ’s role as a teacher is often one that women fill, both in the home and in society. Even the emblems of the holy sacrament, which represent Christ’s spiritual sustenance of the world through His flesh and blood, are an archetype of a mother sustaining the life of an unborn child through her own flesh and blood.

In many instances, Christ refers to His own characteristics in the female form. In Isaiah 66:13, the pre-earthly Messiah told Israel, “As one whom his mother comforteth, so will I comfort you.” 3 Nephi tells us that when He was among the Nephites, Jesus repeated a maternal phrase originally recorded in Matthew four consecutive times: “How oft would I have gathered you as a hen gathereth her chickens under her wings” (3 Nephi 10:5). These scriptural examples make a direct comparison of the Savior of the world to a female mother figure.

Alma prophesied that Christ would “go forth, suffering pains and afflictions and temptations of every kind” and “take upon him the pains and the sicknesses of his people.” He also said Jesus would take upon Himself everyone’s infirmities, “that his bowels may be filled with mercy, according to the flesh, that he may know according to the flesh how to succor his people” (Alma 7:11–12). The Savior fulfilled this prophecy when He atoned for humankind in the Garden of Gethsemane, died on the cross, and rose again on the third day as the resurrected Lord.

As Christ ministered among the Nephites, He invited them to come forth one by one and touch Him, that they might know of a surety that He was “God of the whole earth” (3 Nephi 11:14). In the same way that each Nephite felt the wound marks in His hands, feet, and side individually, Christ felt our wounds individually. He descended below all to suffer our pains, heartaches, and experiences according to the flesh. This infinite Atonement allows Him to understand all of us—women, men, children, and anyone in between. He has a perfect knowledge of everyone’s life situation, regardless of gender, race, or identity. He knows how to succor each one of His people, as a mother knows intuitively how to succor and care for a child.

Because of His infinite Atonement, Jesus Christ understands how it feels to be me. He knows what it’s like to be a man with many innate feminine characteristics. He understands how social norms, stereotypes, and gender roles have affected me throughout my life. He knows my personality and can teach me how to use it to be a better disciple. Accessing the enabling power of Christ has taught me to not see my stereotypically feminine traits as “less than” or “embarrassing.” In fact, qualities that some label as “girly” or “gay” frequently allow me to connect with others and love as the Savior loved.

Charlie Bird—the viral face of BYU during his years as Cosmo the Cougar—made waves across the nation when he came out and revealed to BYU fans that he is gay. Now, in Without the Mask, Bird reflects on how his identity has strengthened his testimony and how he views his sexual orientation in conjunction with his faith in Jesus Christ. Now available at DeseretBook.com.