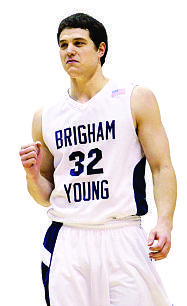 'Jimmermania' drawing attention to the Church

The colorful frames of a DC Comic strip have long told the "Rock-em/Sock-em" adventures of Superman, Batman, the Green Lantern and other superheroes. It's not where you'd expect to find an LDS Church reference.

Yet there — in last fall's annual Sports Illustrated college basketball preview — was an entire DC Comic storyboard dedicated to the heroics of the-Mormon-cum-basketball-superstar Jimmer Fredette and his older brother/rapper T.J. In the animated panel, a mustachioed hipster introduces the heroically-sketched siblings as "an LDS rapper-baller duo, the Brothers Fredette! T.J. on the mic, Jimmer on the Rock."

A comic strip crowning Jimmer Fredette a "Hoops Hero" in the United State's most storied sports magazine only turned the crank on what has become "Jimmermania." Thanks to his prolific scoring and ridiculous assortment of jump shots and dribble-drive moves, Jimmer Fredette has become one of the most talked about (and Tweeted) athletes of the new year. Sports magazines, 24-hour sports networks and even the nation's august newspapers have all requested an audience with the young man from the blue-collar town of Glens Falls, N.Y.