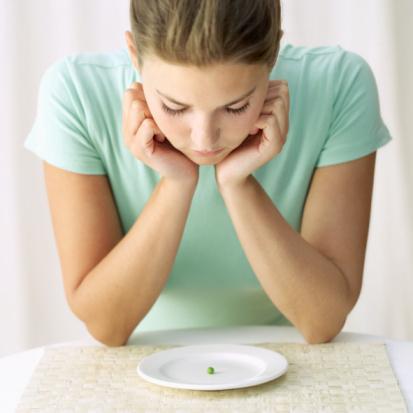 I’ve fought and abused my body, trying to destroy it. There were times when my goal really was to starve myself to death and fade away to nothing. Even when I wasn’t fully acting out in an eating-disordered manner, I still combated the desires to starve myself, to be thin as could be.

But I didn’t just starve myself or make myself throw up to be thin. It was a way of dealing with and avoiding depression, hurt, or other issues. It was a way of finding control when I felt I couldn’t handle things. It was an addiction. It was an illness. And even when I was strong enough to resist that temptation, I still desired it.

Even though those actions and thinking patterns are no longer a part of my daily life, the way they changed me is something I carry with me every day.

Some of the physical effects of the eating disorder linger in my body today. I still have a lot of food quirks. I have negative memories that pop up in association with certain foods or situations.

But more importantly, I've become better and stronger. As the Lord promises, weaknesses truly can be made strengths.

Now, I focus on eating healthy, fresh, and local foods. I focus on exercising so I can accomplish my goal of running a marathon, not so I can be thin. I see beauty in a woman who is strong and capable rather than gaunt and frail.

Recovery wasn't easy or quick. It took more than three years to climb out of it in varying stages, plateau at comfortable levels of normalcy, then slip back again even lower than I had been before. It took talking with doctors and counselors and friends, hours of self analysis and more than 50 pages of journaling on the subject, researching the illness, and slowly maturing and gaining confidence in myself as a human being with inherent divine nature.

All of those things were essential parts of my healing, but it wasn't complete until I fully turned myself over to God and followed the promptings I was given. I didn't know why I was supposed to do the things I felt I was being guided to do, until I gradually realized that because I was following those promptings, I hadn't felt the desire to skip a meal or throw up in days--no, weeks--now months.

After a while, I realized it wasn't coming back. The greatest miracle I have witnessed in my life happened inside me without my realizing it. And now, my eating disorder lingers with me today in one most important way: I know God loves me and he healed me.

It is possible to recover from an eating disorder. It may not come quickly, and it may not come the first, second, or 12th time. It may not come if you only try one approach. But if you rely on the Lord, in addition to all the other resources available, it can come.

Looking back at the years I struggled, I don't regret them. Without them, I wouldn't know beyond a shadow of a doubt how much God loves me and looks out for me. I wouldn't have had the trials that make me stronger now. I wouldn't be able to share my experiences with others as a source of hope or empathize with those who need a listening and understanding ear when they're struggling with their eating disorder. Even though, in many ways, my eating disorder was a hindrance to my life, in the end, it became a catalyst for my progression.

I try to live by that every day.

To read Kaela's full article on eating disorders and their impact on body, mind, and spirit, click here.