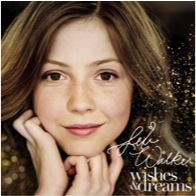 Portrait Records announces the release of Wishes & Dreams, a 3-song EP available August 12 from Lexi Walker, the 14-year-old YouTube singing sensation. A follow-up to her 2015 holiday album, Merry Christmas, this new EP features a fresh, brilliant take on two Disney classics, “A Dream is a Wish Your Heart Makes” from Cinderella and “When You Wish Upon a Star” from Pinocchio. Also featured on the album, coinciding with the 2016 Olympics, Lexi re-energizes “The Power of the Dream”—Celine Dion’s legendary opening ceremony number from the 1996 Games—with her trademark youthful power and sparkle.

“I chose these songs because I felt like they were timeless classics, something everyone can enjoy listening to,” says Lexi. “Disney music is iconic and even though there are countless covers, I wanted to share my version. The lyrics are awesome, and the arrangements by Lisle [Moore], Kendra [Lowe] and Kurt [Bestor] are equally amazing!  I especially enjoyed doing ‘Power of the Dream’ - the music is so powerful, and Celine Dion is one of my favorite artists. Singing any one of these songs makes me feel like wishes and dreams really do come true!”

At 2 years old, Lexi Walker, the dynamic young songbird, sang in front of her first crowd.  A decade later, the angelic-voiced redhead from Salt Lake City, Utah, signed to Portrait Records. Lexi starred in a viral video of “Let It Go” from Disney’s Frozen with Alex Boyé and the One Voice Children's Choir, which has garnered nearly 80 million views!  She has appeared on America’s Got Talent, Good Morning America, Disney’s Frozen Christmas Celebration and The Queen Latifah Show; and sung with The Piano Guys, Kristin Chenoweth, Lindsey Stirling, David Archuleta, Jenny Oaks Baker, the Lyceum Philharmonic, and the Fairfax Symphony.

To date, Lexi has performed in Las Vegas, Walt Disney World, Carnegie Hall, Radio City Music Hall, and The Kennedy Center at Christmas-time for the Troops, as well as singing the National Anthem at stadiums throughout the U.S.  Overseas, Lexi has done a tour of Japan and performed in China at the Beijing International Film Festival.  For more information visit lexiwalker.net.