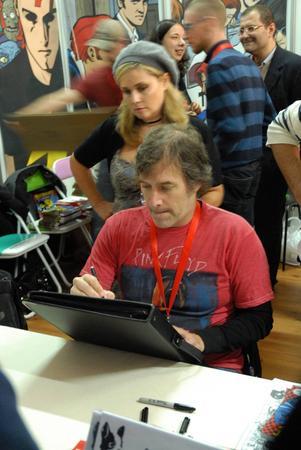 You’ve been quite open about your Mormon faith — you’ve even drawn an adaptation of The Book of Mormon. Had you always been part of the faith, or did you arrive at it later as part of that existential search for meaning that you mentioned? Do your beliefs inform Frank?

MA: That also was subconscious. My parents got divorced, which is extremely rare in the Mormon Church. I think there’s like a five-percent divorce rate for couples that have been married in the Mormon Temple —

Laura Allred: I think before, but not now.

MA: — but, you know, just ridiculously successful. So, for my parents to get divorced, there was almost a shame to it. My older brother and younger brother went with my mom who went back to where she grew up, back in the Rocky Mountains by Salt Lake City. I stayed in Oregon with my dad who was a psychologist and worked at the hospital that One Flew Over the Cuckoo’s Nest was based on. Ken Kesey was his orderly. At that point — I hate to admit it — it was really fun, just me and dad. In a lot of ways, though, I kind of raised myself, and we had stopped going to church at this point, around when I was 11. A lot had been instilled in me, even though I didn’t practice the faith. Then, several years ago, my aunt gave me the journal of my great-great-grandfather who knew Joseph Smith — the prophet of the Mormon faith — and from New York, he went with Joseph Smith everywhere he went.

Read the rest of this story at bleedingcool.com