'Marvelous Stories': A Heritage of Faith and Sacrifice Bring the 100-year History of the Laie Hawaii Temple to Life

As a 9-year-old girl, Mary Ann Mele Wong Song traveled with her family from their home in Kauai to Oahu for the dedication of the Laie Hawaii Temple in November 1919.

After taking an overnight boat ride to Honolulu, the group caught the Dillingham Railroad Express across the countryside to Laie where they joined more than 1,200 members of The Church of Jesus Christ of Latter-day Saints who had gathered for the monumental four-day event.

President Heber J. Grant dedicated the Laie Hawaii Temple on Thanksgiving Day, November 27, 1919, in the first of five dedicatory sessions. He described the dedication experience as "a spiritual feast never to be forgotten."

Song and her sister, Sarah, were among 235 Primary-age children, all dressed in white, permitted to attend the Sunday morning dedicatory service. 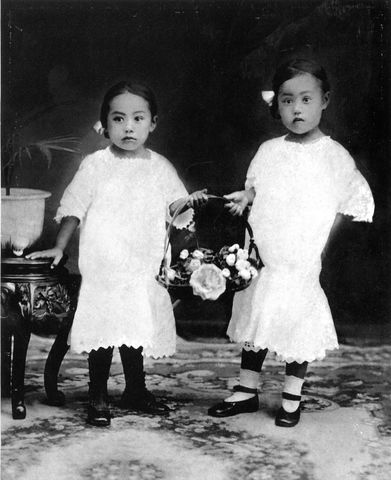 Sarah and Mary Wong as children before the Laie Hawaii Temple dedication. Image retrieved from FamilySearch.

"The children . . . were taken into the temple and walked up and up until we came to a room that President Heber J. Grant was in. He welcomed us and talked to us. He asked us to sing one of his favorite songs, which was, 'Who's On the Lord's Side? Who?' which we all did. He sang with us too," Song later recorded: "This was such an exciting time because it was the first time I had ever seen a prophet of the Lord. He held his hand up and waved it across the roomful of children."

"I stayed in the font so long that my fingers and toes became wrinkled. They had to pump warm water into the font," Song wrote. "This was my first experience in the temple. [It] was so beautiful."

Song shared her memories of attending the Hawaii temple dedication in a sacrament meeting in the 1990s. She died at age 94 in 2005.

Her personal account is now one of hundreds compiled and preserved in a new history of the Laie Hawaii Temple as Latter-day Saints celebrate the historic temple's 100th anniversary at the end of the month.

The new history is titled The Laie Hawaii Temple: A Century of Aloha, published by Religious Studies Center BYU and Deseret Book. It was organized and written by Eric-Jon Keawe Marlowe, an associate professor at Brigham Young University-Hawaii in the Department of Religious Education.

The 430-page volume is a historical narrative that starts with the 1850 arrival of the Church in Hawaii during the Kamehameha Dynasty and takes readers through the decision to build a temple in 1915, the construction, dedication, and decade-by-decade up to the present day, Marlowe says.

Marlowe was assisted by Clinton D. Christensen, a global acquisitions specialist at the Church History Library and a historian in the Church History Department, who gathered sources and collected oral histories. Many others collaborated on the project as well, Marlowe says.

Christensen, with the help of senior missionaries Gary Davis and Michael Morgan, compiled more than 300 oral histories related to the Laie Hawaii Temple. About 130 of those have been compiled into a supplemental book, Stories of the Temple in Laie, Hawaii. This volume was published by the Jonathan Napela Center for Hawaiian and Pacific Island Studies at BYU-Hawaii.

The temple's history, along with the personal stories, represents the heritage of faith, sacrifice and tender feelings members have for the temple, Christensen says.

"There's the faith of the Polynesians that you always hear about," Christensen says. "These really are marvelous stories."

A centennial committee was formed to help commemorate the temple's milestone. A website was created (laietemple100.org) with an events calendar, photo gallery, resources and other information about the temple and its rich history.

“The Laie Hawaii temple has been a great blessing and beacon in all our lives,” says Steve Laulu, president of the nearby Kaneohe Hawaii Stake and chairman of the temple’s centennial committee. 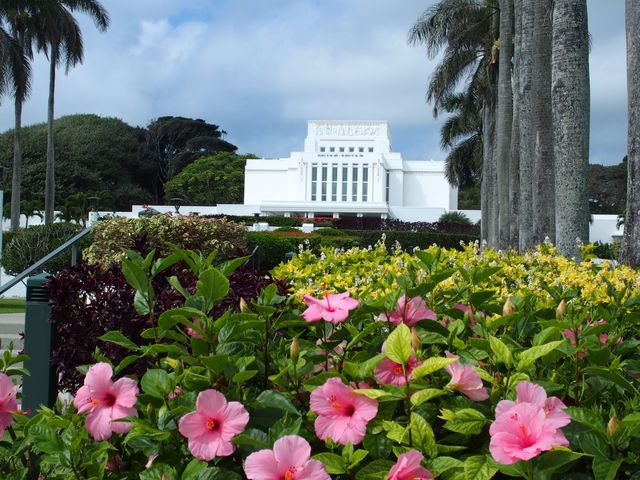 Flowers in front of the Laie Hawaii Temple. Image by Jeffrey Swinton.

The Laie Hawaii Temple became the Church's fifth in operation and was the first built outside North America, a distinction it owned for more than 35 years. It is also the fifth to reach 100 years of operation. It may be considered a "pioneer temple," Marlowe says.

"The leading factor in President Joseph F. Smith's 1915 decision to build a temple was his firsthand observation of the Hawaiian Mission's solid leadership and strong membership (many were third-generation members by that time)," Marlowe said. "Finally, Laie had been the gathering place for Hawaiian Saints since the Church purchased it in 1865, 50 years prior to the temple's announcement in 1915. The dedication of the temple in Laie instantly made it a special gathering place in the Pacific and Asia."

The addition of BYU-Hawaii in 1955, with its increasing international student enrollment, and the Polynesian Cultural Center, with its legions of visitors over the decades, next to the temple has created a place unlike any other with "unique global influence," Marlowe says. 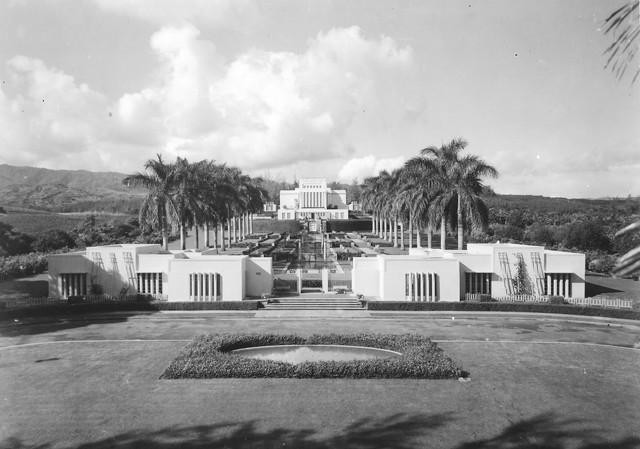 The Bureau of Information (visitor's center) was added in 1938. Image by Mark Jones.

"Over the past century, likely more people have been introduced to the restored gospel of Jesus Christ on the Laie Hawaii Temple grounds than any other Church site except Temple Square in Salt Lake City," Marlowe says.

The first Asian temple excursion to the temple was organized in 1965 when 165 Latter-day Saints traveled from Japan to Hawaii to attend the temple. In 1970, the Japanese Saints were joined by members from Korea, according to a Church magazine article by Clinton D. and Angela R. Christensen.

"This trip produced incredible strength for the Church in Japan. Ninety-five percent of these members remained active in the Church," the article states. "Five later became temple presidents in their homeland, including Elder Yoshihiko Kikuchi, the first general authority from Japan."

A second temple, in Kona, Hawaii, was dedicated by President Gordon B. Hinckley in 2000.

T. David Hannemann was the first full-time employee hired by the PCC and served as president of the Laie Hawaii Temple from 1995-1998. He died in 2018.

"There’s no place like it in the world," Hannemann said at the rededication in 2010. "We have the temple, the BYU-Hawaii and the PCC. They all work together. And this has become one magnificent campus. Isn’t that wonderful?”

It was a tall task for Marlowe to sift through 100 years of history, including seemingly countless documents and interviews with former temple presidents and matrons and others, but the journey was inspiring, he says.

"In this real and sometimes raw and unadorned extended narrative, I see the foundation laid upon which future generations stand," Marlowe says.

"It is this temple’s interwoven human story of faith and sacrifice that can invoke in us a deeper appreciation for temple worship and bolster our own faith and inspire us. And this is the ultimate hope in telling the story of the Laie Hawaii Temple."

Over the years, members have reported a number of remarkable temple and family history experiences and many have been included in Christensen's "Stories of the Temple." One of his favorites comes from Kanani Casey, a member of the Hauula 2nd Ward in the Laie Hawaii Stake. Her grandmother came from Japan to Hawaii in the early 1900s and brought with her a Japanese silk scroll, embroidered in ancient Japanese with the names of her ancestors dating back to 1080 A.D. Ordinances for those ancestors were eventually performed in the Laie Hawaii Temple. 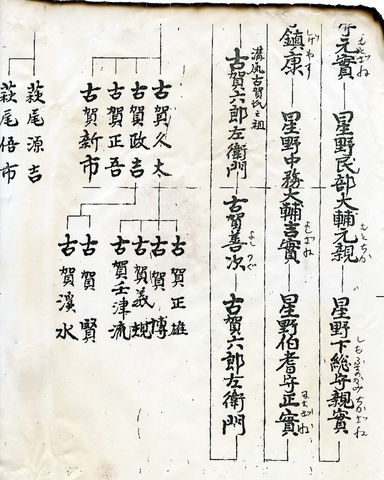 A page of the ancient Japanese scroll with a burned edge. Image by Kanani Casey and BYU-Hawaii Archives.

In 2013, Casey's home was destroyed in a fire. While sorting through the remains, they found a blue plastic bag that somehow survived.

"All that was left was the plastic bag, amazingly still intact, containing the copies of the scroll, translations, and history," Casey wrote. "The manuscript was just a little burnt around the edges, but it was the only thing that survived in our bedroom. This was just another tender mercy that the Lord showed us, that he cares for each and every one of us and that doing family history and temple work is what binds us together and makes it possible to be together forever. The Lord wanted that bit of history to survive for the benefit of my posterity as a testament of his love for us and to show us the importance of doing family history and temple work."

After joining the Church, Kwai Shoon Lung requested family history records from family members in China. He told his genealogy class that one night he had a vision in which his deceased ancestors beckoned for him to do their temple work. Three days later, he received family records dating as far as back as A.D. 1221.

Julina Lung, his daughter-in-law, served as matron of the Laie Hawaii Temple from 2001 to 2004 and helped to see the work for these ancestors completed.

"As far as I know all the work was done in the Laie Hawaii Temple," Julina Lung wrote.

Phillip H. McArthur served as a missionary in the Marshall Islands in the 1980s before becoming a professor at BYU-Hawaii. As a missionary, McArthur recalled teaching a man whose family had accepted the gospel, but he had not. One night the missionaries showed Amima Alik a flip-chart photo of the temple and talked about eternal families. Alik imagined that going to the temple would be "wonderful," he said, but as a man of humble means, never expected to have that opportunity to attend the temple in this life, McArthur wrote. Alik was later baptized and served as a branch president.

In 2008, the temple president asked McArthur to translate for some members from the Marshall Islands. As he walked into to assist with the ordinance McArthur came face to face with his old friend, Amima Alik, the same man who 30 years earlier though he would never have the resources to make it to the temple.

"We both started to cry," McArthur wrote. "We stayed for their sealing. A powerful moment to see the full circle of this thing that seemed impossible 30 years before. There he was, and they were being sealed in the Laie Hawaii Temple."

The ultimate purpose and power of the Laie Hawaii Temple is not found in its history, its outward beauty, or on its grounds, but rather can be discovered only by those who worthily spend time within its walls, Marlowe says.