The Amazing Work We Are Doing Around the World 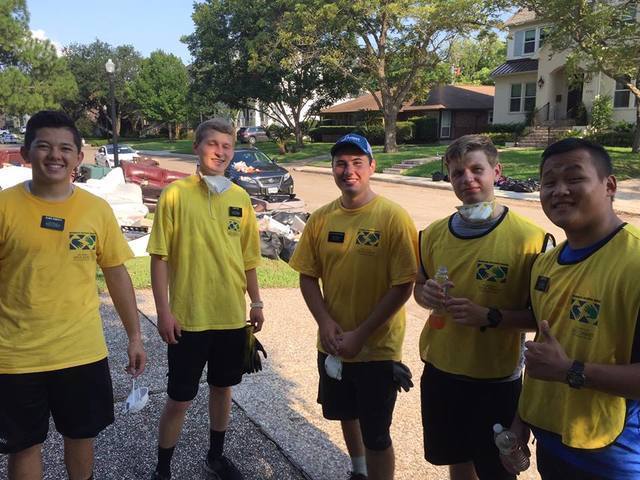 After the devastation of Hurrican Harvey ripped through Houston, Texas, and surrounding areas, many were left with homes partially or completely underwater.

To make things worse, the flood water was contaminated with sewage so when the water receded and families returned to their homes, they were forced to rip out and throw away most of what the water touched. As many began this daunting, overwhelming task, they were greeted by members and missionaries wearing the bright yellow Helping Hands t-shirts.

The Mormon volunteers moved from home to home until they helped clear out entire neighborhoods of contaminated debris. Many did this even though their own homes were in need of repair. Their work did not go unnoticed.

"I knew the Mormons would come," an elderly woman said when she saw the yellow shirts, according to a Facebook post from the Texas Houston South Mission.

► You'll also like: "'I Knew the Mormons Would Come': LDS Missionaries Begin Cleanup Work in Houston after Hurricane, Floods" 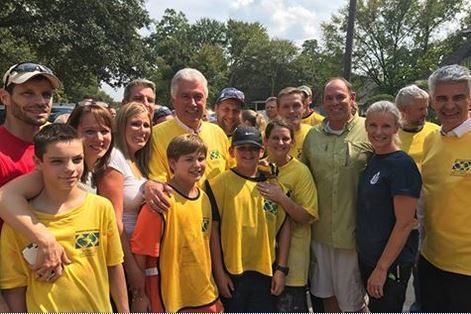 After Hurricane Harvey devastated much of the Houston, Texas, area, President Dieter F. Uchtdorf traveled to Houston to visit the Saints in the area and assess the damage.

While there, President Uchtodorf shared messages of hope with the Saints and posted a message just for the Saints in Houston when he left the area.

I want to speak directly to my friends in Houston, but I also hope this message can be helpful to you, wherever you are, if your own spiritual floodwaters are rising and you don’t know where to turn.

The Lord has given us a reassuring message of hope: “Fear not, little flock . . . Look unto me in every thought; doubt not, fear not” (D&C 6:34, 36).
Hope sustains us through despair. Hope teaches that there is reason to rejoice even when all seems dark around us.

And to all who suffer—to all who feel discouraged and worried—I say with love and deep concern for you, never give in.

When we have hope, we acknowledge the difficult path ahead of us, but we move forward in faith, knowing that God will see us through these times of trial.

My friends, embrace and rely upon the Hope of Israel, for the love of the Son of God pierces all darkness, softens all sorrow, and gladdens every heart. I love you and I pray that you may find hope during these difficult times.

► You'll also like: "President Uchtdorf Visits Houston Temple, Shares Message of Hope for All After Visiting Victims of Hurricane Harvey" 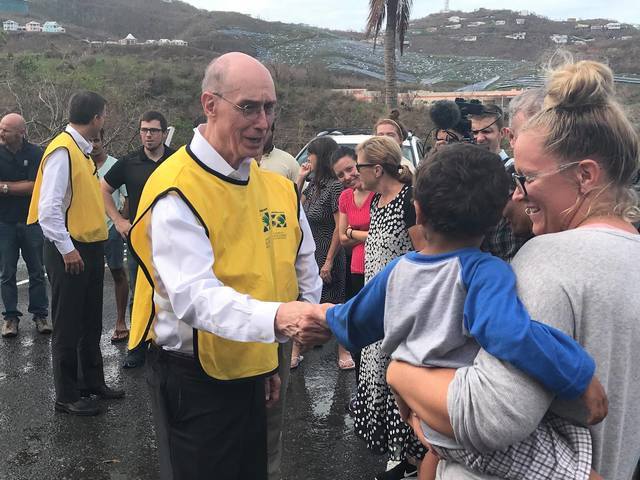 After Hurricane Irma, Hurricane Maria ripped through Puerto Rico and Florida. President Eyring  visited the Saints in both areas, saying, "I felt the Lord wanted me here."

The visit was not at the most convenient time for the member of the First Presidency. General conference was only a few weeks away and he was planning on attending the upcoming inauguration ceremony of his son, Henry J. Eyring. However, President Eyring taught all members of the Church a lesson of true Christlike service when he visited with those in Puerto Rico and Florida and shared this beautiful message on Facebook.

This hurricane has caused severe damage and intense heartache. We weep with those who find themselves in dire circumstances. Many of these people are praying to Heavenly Father for relief, for help in carrying their burdens. As followers of Jesus Christ, it is our privilege to serve God’s children as we bear one another’s burdens, mourn with those who mourn, and comfort those who stand in need of comfort.

I testify that the Lord loves His children in need and also those who want to help. Our Heavenly Father hears the prayers of His children across the earth pleading for food to eat, for clothes to cover their bodies, and for the dignity that would come from being able to provide for themselves. Those pleas have reached Him since He placed men and women on the earth.

Because the Lord hears their cries and feels your deep compassion for them, He has from the beginning of time provided ways for His disciples to help. He has invited His children to consecrate their time, their means, and themselves to join with Him in serving others.

I invite each of us to prayerfully consider how we can bless the lives of the many people around the world who are in need of assistance. I pray God will guide you in your efforts to lift others. 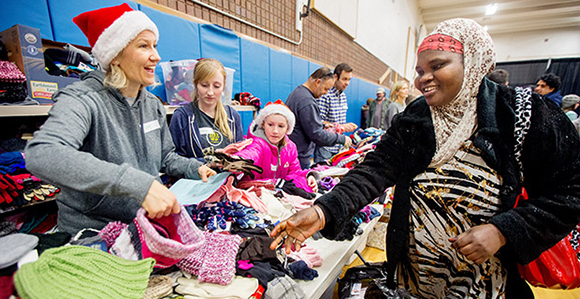 This year, the Church made a $5 million donation to aid ongoing refugee relief efforts throughout the U.S.

The donation included $3 million in goods and services and $2 million in cash to nine U.S. charities that help resettle refugees.

Of the donations, Presiding Bishop Gérald Caussé recently said, "As followers of Jesus Christ, we are called to bear our neighbors’ burdens and provide them with refuge from the storms of life. . . . Local organizations know the unique needs of the communities they serve. Along with our prayers, we provide this support to help them respond to the needs in communities across the nation." 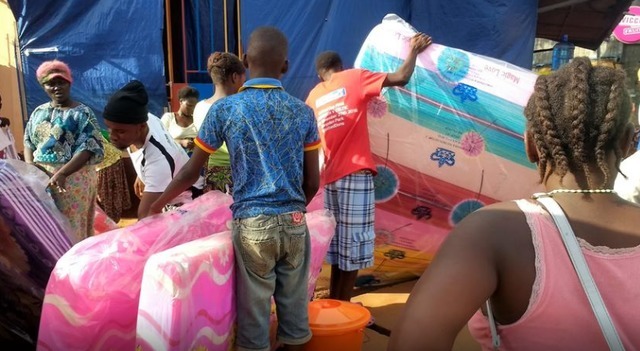 The charity helped provide aid to those in need by donating mattresses, food, water and other life-sustaining supplies to 105 families. Nearly all those who were aided by LDS Charities were not members.

Leaders of LDS congregations went door to door to determine who needed aid the most, then submitted their needs to LDS Charities after three days of rain-triggered flash floods and a massive mudslide near Freetown.

The efforts of the Church and local leaders were later recognized by the President of the West African country.

“On behalf of the government and His Excellency, the President of Sierra Leone, we say kudos to your Church and its members,” Freetown city official Shiaka Lamin Dumbuya said, according to Mormon Newsroom.

► You'll also like: "'Kudos to Your Church and Its Members': Church Helps Victims of Deadly Sierra Leone Mudslides, Receives Praise from Officials" 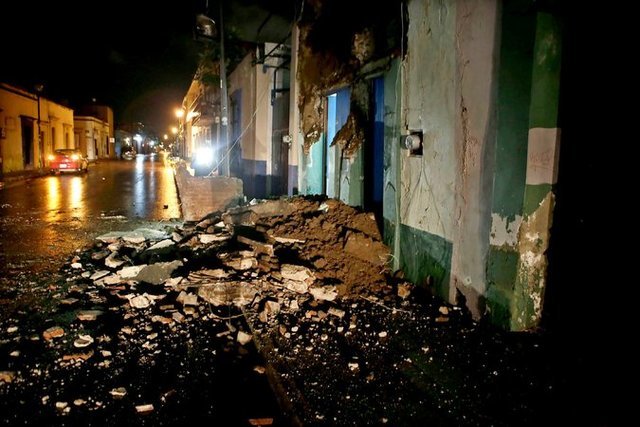 After two devasting earthquakes struck Mexico within two weeks of each other, destroying thousands of homes and killing hundreds, the Church responded by offering aid and support to those affected by the two disasters. Sending hundreds of tents, food, hygiene kits, and other relief items to those in need, the Church helped thousands who were affected by the 8.2 and 7.1 magnitude earthquakes.

"Like the rest of the world, we are deeply concerned about the many natural disasters that have occurred throughout the world in recent weeks. The earthquake that struck [on September 7] in Mexico affected thousands of people, and we pray for their safety and well-being," a Church statement read. 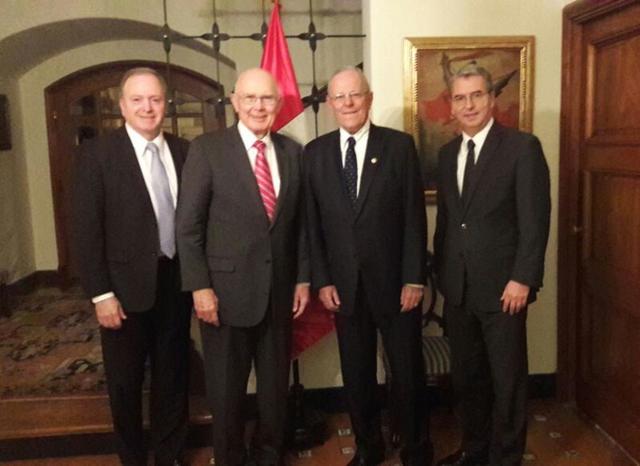 After floods and mudslides ripped through Peru last spring, leaving hundreds of thousands without homes, the Church responded by shipping more than 200 tons of food and supplies to devasted areas.

"I am grateful for this assistance from the Mormon Church in this difficult time for Peruvians," Peruvian First Lady Nancy Lange said, according to lds.org. “Not only has Piura been affected by the rains, but also other regions such as Lambayeque, La Libertad, Tumbes, and Ancash.”

And while Elder Oaks was visiting Lima, Peru, this year, Peruvian President Pedro Pablo Kuczynski asked to visit with Elder Oaks to thank him for the Church's aid. President Kuczynski also spoke with President Eyring via video conference to express his gratitude.

"The purpose of this call is to thank The Church of Jesus Christ of Latter-day Saints for the help it provided in a time of emergency that our country recently experienced—along with the sacrifice of the Church members and volunteers who [served] where they were needed,” President Kuczynski said, according to lds.org.

"Words alone are not enough to thank the Church for all it has done during this emergency,” First Lady Nancy Lange added.