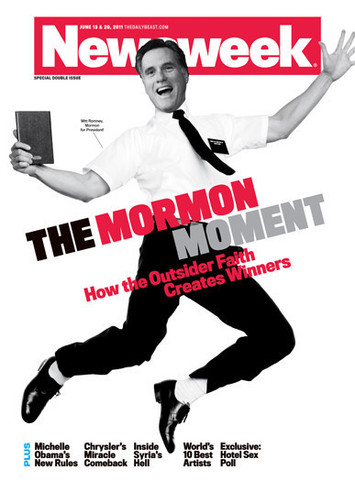 Featuring Mitt Romney's head on the body of a leaping Mormon missionary, Newsweek's cover story this week – titled "The Mormon Moment" — has some Latter-day Saints leery about what the feature might say concerning their faith.

"Don't judge the story by its cover alone," said Newsweek reporter McKay Coppins, an active Mormon who worked closely on the project. "I think members of the Church will find that the package treats Mormonism fairly."

Members of The Church of Jesus Christ of Latter-day Saints might take issue with some of the wording in the article, like calling the temple ceremonies "secretive," or making casual reference to the LDS temple garment, which members consider sacred. Yet some Latter-day Saints may be pleased with the article's positive message reflected in its headline: "Mormons Rock!: They've conquered Broadway, talk radio, the U.S. Senate-and they may win the White House. Why Mitt Romney and 6 million Mormons have the secret to success." Indeed, the article – which offers a secular defense of Mormonism – reads at times like a sales pitch for the faith.