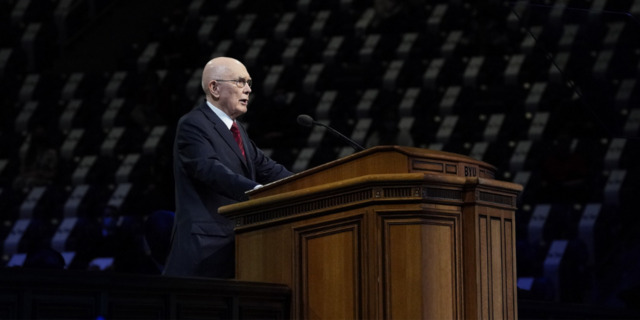 ‘Of course, Black lives matter’: President Oaks speaks on ‘Racism and Other Challenges’ at BYU devotional

In his address, President Oaks spoke about current events tied to racism, like the police-produced death of George Floyd, as well as historical examples of racism, as reported by Church News.

Speaking about the protests following the death of George Floyd carried under the message of “Black Lives Matter,” President Oaks said, “Of course, Black lives matter—that is an eternal truth all reasonable people should support. Unfortunately, that persuasive banner was sometimes used or understood to stand for other things that do not command universal support. Examples include abolishing the police or seriously reducing their effectiveness or changing our constitutional government. All these are appropriate subjects for advocacy, but not under what we hope to be the universally acceptable message: Black lives matter.”

President Oaks also addressed how people are seeking to erase certain individuals from history who had a connection to slavery. He acknowledged that calls had been made to change the names of some campus buildings, in addition to the name of Brigham Young University. He quoted Winston Churchill, warning about “quarrel between the past and the present.”

“The predecessors of many Americans of different backgrounds made great sacrifices to establish this nation,” President Oaks said. “Whatever those sacrifices—of freedom, property, or even life—let us now honor them for what they have done for us and forgo quarrelling over the past. Ours is the duty to unite and improve the future we will share.”

Read a full summary of President Oaks’s remarks at Church News. A transcript of his address, “Racism and Other Challenges,” is also available at Newsroom.

Byu RacismByu,Racism,
Comments and feedback can be sent to feedback@ldsliving.com