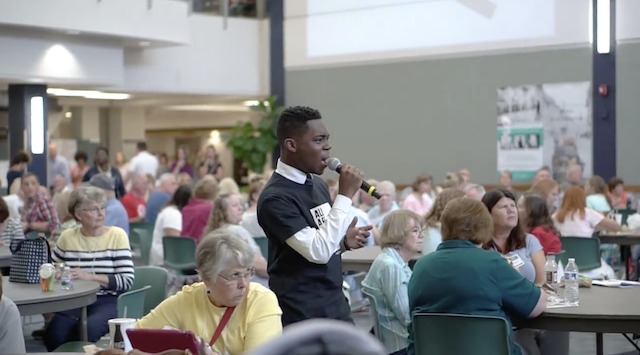 "Our Souls Are in This Music": Flash Mob Stuns Crowds with Incredible Message About God

At first, the students and BYU Education Week visitors didn't notice the man standing amidst the tables, a microphone in hand as he sang the familiar phrase.

"I am a child of God," he repeated in perfect pitch, this time joined by a young woman in the crowd.

This time, a few people looked up from their lunches and phones, slowly realizing what was happening as others around them began to stand.

"I am a child of God," the man and woman sang again, this time he was joined by others who were standing around the room. Cheers arose from the crowd as they recognized what was happening. It was a flash mob, but not like any flash mob they had likely experienced before.

As the food court at the Wilkinson Center filled with the voices singing "I am a child of God," it became apparent this was about more than just a song. It was worship from brothers and sisters of different genders, races, and backgrounds who were alike unto God.

"If we really believe that, that all are alike unto God, how would we behave?" asked Zandra Vranes, a producer for the upcoming film Jane and Emma. "How would we act toward each other?. . . We hoped by doing something that was action based, that by coming out and bringing this message, it will encourage people to do their part."

The message behind the flash mob and song "A Child of God" was inspired by the upcoming film Jane and Emma, a film that portrays the relationship between Jane Elizabeth Manning James, a woman of profound faith and one of the first black converts to the Church, and Emma Smith, the wife of the prophet Joseph Smith.

Tamu Smith, another producer for the film, said the flash mob also helped create visibility for the film before its October release.

"We wanted something so that we could capture people's attention, and also at the same time, we know that singing is a way of worship and praise and we wanted to praise and worship with our brothers and sisters at Education Week."

She adds, "We want people to know that we are all brothers and sisters and the gospel belongs to all of us. We are all here. We're all willing to do our part to help promote God's voice, to help uplift God's voice anyway we can."

Ali Stebar, who participated in the flash mob, agrees, "I hope people remember the spirit people felt during this song," she says. "It's very different from what we typically hear in an LDS setting. It's praise, it's worship, it's gospel."

For Clotile Bonner Farkus, who plays Jane's older sister in Jane and Emma and joined her family in creating the music for the film, the message in the music, which is featured in the end credits, was a sacred one.

"All of our souls are in this music," she said. "It's being played for everyone here and we're so glad to share and be a part of this."

Watch the incredible music performed by the flash mob below.