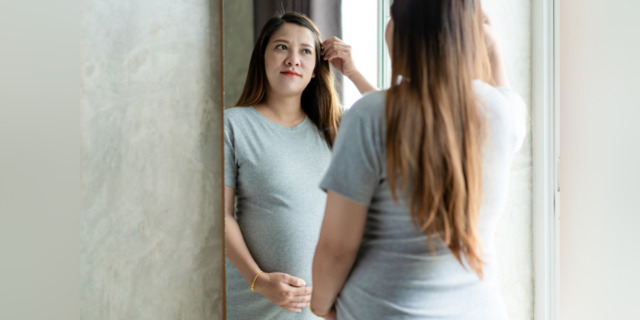 “Our Very Bodies Have Become Our Book of Life”: A Message to Moms Struggling to Embrace the Marks of Childbearing

Perhaps one of the most discouraging struggles women endure is that never-ending battle with our own bodies. A woman’s attitude toward her own body is fraught with misconceptions fueled by a world that celebrates an almost prepubescent female body as the ideal norm. Unfortunately for most of us, time moves on. We are no longer seventeen, a number of children have made their way through our birth canals, and gravity is exerting its inexorable pull. Whenever we look in the mirror, we are reminded of what we are not. Satan would have it just that way. He would have us think that because our bodies do not look a certain, supposedly desirable, way, they are not worth having at all. Thus, we enter into a war with our bodies, hating the very tabernacle our Father has given us, despising the flesh. If Satan can get us to fixate on our bodies, either in vanity or self-loathing, then he has caused us to misunderstand completely the role our bodies play in our salvation.

I was pregnant all one summer. I spent my time bobbing in the deep end of Deseret Towers’ pool watching the women go by. I wondered why the women who had contributed the most to our society seemed to feel the least confident. Why did they cover their bodies as if in shame, disrobing only to plunge quickly down, their shoulders barely emerging above the waterline as they stood watching their children swim? Why did the freshman Deseret Towers’ residents, young women who knew nothing of what breasts and hips and wombs are meant to do, rule, queens of the roost? In a better world, in a kinder, more saintly world, a mother’s body would be kindly regarded, with respect and honor for what she has given, for what she has done. I am learning that a woman who mothers well gives all she has: body parts, internal organs, limbs. Some parts are temporarily donated; others, irreparably altered; most effects are permanent. And, if she lets this mothering sink into the marrow of her bones, if she allows the job of nurturing to wrestle with her spirit, a woman’s soul is wrought in the image of God.

For me, having a woman’s body has meant special tutoring in life and death. I have been pregnant four times. Each pregnancy ended in a surgical procedure. Three times out of four, my stomach and uterus have been cut open to retrieve, in all their bloody splendor, Julia, Christian, and Seth. Each time, I have entered the mother’s valley of death, bringing my body under the knife, to lie still as someone cut into my flesh to release life from my womb. What should be a joyous moment is full of fear for me. At the birth of Seth, our youngest, I lay on the operating table trying so very hard to be brave. But I was petrified, and my body knew it: my pulse raced, I hyperventilated and vomited in an allergic reaction to the epidural. My eyes filled with tears. On one level, I desperately wanted to run from that certainty of pain and possibility of death. Yet I had no other choice if I wanted the life within me to live.

As I lay on the table, my mind filled with the image of Annie Dillard’s tomcat, who would jump through her bedroom window at night covered with the blood of his kill. When she awoke she would find herself “covered with paw prints in blood.” “I looked as though I’d been painted with roses,” she recalled. Annie would ask herself, “What blood was this, and what roses? It could have been the rose of union, the blood of murder, or the rose of beauty bare and the blood of some unspeakable sacrifice or birth,” (Pilgrim at Tinker Creek, 1974). She never knew exactly how to read “the midnight canvas.” And I never know when I am on that delivery table exactly what is happening to me. Am I the site of some unspeakable horror or some unspeakable joy? Paradoxically, I am both: An open womb, a uterus pulled out onto my abdomen; an immense pressure, an indignant cry, and a wrinkled old man’s face that looks at me from beneath the hospital beanie like a Sharpei puppy. Only after I place my swollen, reluctant body on the table can I hear those first sounds of life. And no, the recovery is never swift in return for my heroism. My stomach has been bisected, the severed nerves need to learn to stop screaming. My bowels remain sluggish from the epidural; my head pounds from the allergic reaction I have known was coming since my first pregnancy.

As I battle through the pains, my body begins to make milk for the child who needs to be fed. When I am barely coherent, unable to sit up, the nurses bring my newborn to me. “He’s hungry,” they say. “Put him to the breast.” So I struggle upright, ignoring the burning incision, to cradle the little body that was so recently inside me. I turn his mouth to me and do for my son what he cannot do for himself. And I understand a little more now how the Savior would “take upon him death, that he may loose the bands of death which bind his people” (Alma 7:12). The demands and duties of life, of the soul, take precedence over the travails of the body.

The third of my four pregnancies ended in death. On a long November Monday morning, I labored for ten hours, knowing that the end would produce only the misshapen fetus that my body in its wisdom knew to expel. While my body tried to perform the labor which it knew was necessary, my spirit keened. Medicine calls it a spontaneous abortion. But I have no name for the desolate feeling that clouded my spirit as my body labored. I knew only my baby would not be born the same week my Emperor tulips were scheduled to appear. I knew I could reshelve the baby name books and stop doodling “Nicholas Kevin Santiago” on sacrament meeting programs. I knew my sister-in-law and I would not give my parents their twelfth and thirteenth grandchildren a mere three weeks apart after all. But most of all, I knew I wanted with all my heart to have this child, and I grieved for what was not to be.

But I did not grieve alone. In that valley of desolation brought on by physical travail, I believe the Savior sent angels to be with me, to succor me in my infirmity: My sister who rubbed my back, changed the bath water, and who, while I was at the hospital, cleaned my house, did my laundry, and fed my children; nurses who looked at me with compassion, calling me “dear, sweet Tess,” their words a consolation, “how sorry I am you are here”; women, who knew and had also labored in vain, whose eyes looked at me with a special sweetness; a doctor who, sensitive to my pain, chose to shield me from a surgical procedure in the sterility of his office and instead administered a blissful ignorance through anesthesia as he cleaned my womb of what had been the promise of a child. Most comforting of all, the Lord gave me a husband who held my hand and stood by, waiting and watching, feeling helpless to stop my pain, wishing he could endure for me. I found him sobbing in his office three days later; he too had lost a child. In all my pain, no one had noticed his. Yet, I believe we both felt the arms of the Savior around us healing our hearts in the aftermath of that dreadful week. We felt our neighbors’ tears, their hearts aching, sorrowing for our pain; we heard the faint whisperings of another child in time; we learned lessons in patience from Him who would gather us in his arms as a mother hen would gather her chicks.

Could I have broken my heart to the will of the Lord another way? Would I have come so heavy laden and willingly to the Savior’s yoke? I don’t know. I do know that the death of a small, misshapen body brought light to my soul that perhaps could not have entered any other way. I cannot help but think, as I remember those births, that this human body, also can make us most divine—that the peculiar pains of a woman’s flesh teach her exquisitely, intimately. What they teach she cannot know beforehand or even know that she needs to know. But when the pain subsides or is grown accustomed to, she realizes that some time during the darkest of nights or mundanest of mornings, knowledge has descended like the dews from heaven and enlarged her soul.

Unfortunately, the experience has also enlarged her hips and thighs. If she’s anything like me, she bears the physical scars of that battlefield: the burst blood vessel on my left cheek appeared during labor with Julia. It still spreads spidery-red fingers across my face. The root canal brought on by my pregnancy with Christian left me with a porcelain crown. A seven-inch, maroon scar bisects my lower abdomen. Just below it is another, faded to flesh. Stretch marks ornament my breasts and hips like silver ribbons. My hips are two sizes wider, my feet a size bigger than when I was married—my very bones have expanded in response to my mothering. Some of the effects are temporary, just for the moments of pregnancy: the bleeding gums, the weakened bladder, the hair that falls out in clumps, the intermittent back pain, and aching hips. These pass in their time, but the memory remains.

In that memory lies the glory of this earthly body: though we may be resurrected in a perfect frame, the lessons taught me by my mother-body will rise with me. The sacrifice, the pain, the fear and faith of my mothering will sink into my soul and remain with me in the eternities. My spirit and this woman’s body inseparably connected constitute my fullness of joy. Time writes its messages on all of us. Our very bodies have become our book of life. To what have we been obedient? To the purpose for which we were made: to provide a body and a safe haven for the spirits entrusted to our care. If we mother well, we wear out our lives bringing to pass the lives of others. Of the physical fruits—our wider hips, our sagging breasts, our flatter feet, and rounder buttocks—we need not be so ashamed.

In this thoughtful collection, dozens of Latter-day Saint women across generations share their gospel insights and the occasional contradictions found in everyday motherhood. Perfect for all women in whatever role they occupy, All Kinds of Mothers examines motherhood from a wide range of backgrounds and experiences, reminding us that there are countless ways to fulfill the divine calling of motherhood. Available now at DeseretBook.com.