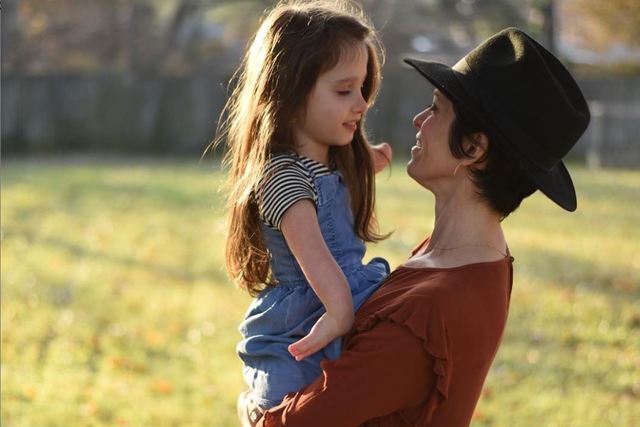 “Every single human being is a gamble, and we love them anyway.” That's Latter-day Saint mother, writer, and artist Amy Webb's life philosophy—a philosophy formed over many years of unexpected twists and turns.

Webb started a family blog in 2005, but what began as a way to keep her family and friends up-to-date soon transformed into something more. When Webb began having children, she experienced postpartum depression, two miscarriages, and unexpected news that would change her family's life forever: her second daughter would be born with a rare condition called microgastria and limb reduction complex. Webb discovered this fact after experiencing bleeding and hemorrhaging during her pregnancy, and, having already endured one miscarriage, Webb rushed to the hospital, afraid she was having another miscarriage.

Instead, the Webbs learned their second daughter, now their middle child, would have limb differences. What began as a family news blog was now transforming into a way Webb could process and share these difficult life changes without having to relive the experience over and over again on the phone. It also became a way she could reshape her perspective.

I thought now would be a good time for a little introduction. . Hi, I'm Miggy, a veteran blogger (13 years and counting), artist, wife, mother and disability advocate. We're a proud special needs family with 3 girls who are delightful, hilarious and occasionally make me want to fake my own death and move to a secluded island. But such is life. I'm married to a tall, dark and handsome man who dabbles in woodworking and who also sticks his hands in children's mouths for a living. He’s a pediatric dentist. . Many people come here because of our daughter Lamp, and now is probably a good time to tell you that I use aliases for my kids, so no her name isn't really Lamp. Lamp was born with what we refer to as Limb Differences, which means, you guessed it--her limbs are different. Fortunately she was also born with extra awesome. (Probably genetic. Shrug.) About 7 years ago I started to interview other families and individuals with disabilities on my blog in a series called the Special Needs Spotlight. To date I've interviewed over 225 people and without a doubt this is the heart of my blog and the foundation for my advocacy work which has recently culminated in my first children’s book, When Charley Met Emma. I am over-the-moon excited about it and I hope you are too as it is an excellent tool for teaching your children about disability. . I tend toward the deep and philosophical or the utterly ridiculous--I want to make you either laugh or cry. Ideally both. I dance in my stories to make my father in law cringe, I talk about disability, motherhood and life in general and sometimes even politics. In other words, let's get uncomfortable! Recently we moved into our accessible dream home that we spent over a year renovating—think ramps, elevators, wide doorways and beautiful design. I can’t wait to show you more of our home soon! . The entire message of my blog could be distilled down to this: We don't get to choose our children's likes, or dislikes, personality, size, shape, intellect, or ability. Every single human being is a gamble and we love them anyway. ❤️ Thanks for being here. . And no, I will never be over @msrachelhollis sharing about my book on her IG live!❤️

"We didn’t know anyone else going through a situation similar to ours. We had so many doctor’s appointments and we were figuring out what it meant to have a two-month-old who had to go to physical therapy," Webb told People. "But soon, I was viewing disabilities in a different way."

With that transformation of how she viewed special needs also came a transformation of Webb's blog. "I also began to view my blog as a platform to give to other parents who might be going through a similar experience and it’s been so helpful to me," Webb told People.

Webb quickly began helping other families with special needs to understand they are not alone in their journey by creating a spotlight on her blog every Friday. In the past seven years, Webb has interviewed more than 225 families and helped share their stories, their struggles, and their triumphs. Of these weekly highlights, Webb says:

"What I didn’t realize I was doing then was that I was getting this great education that’s become such a foundation for pretty much everything else I’ve done towards disabilities. I started with this perspective that was like, we’re special needs families and we’re going to tell all of you what it’s like. It was a very 'me' perspective. I felt like I knew a lot, but I quickly learned that, yes, I have this one daughter with a very specific disability, but I didn’t know anything else. So I really listened a lot and I learned a lot. I just felt so incredibly honored and humbled that so many people wanted to share their stories. It really is beautiful and has been an absolute joy for me."

Webb and her husband are also open about their faith, and she proudly told People at the start of her interview, "We belong to [The] Church of Jesus Christ of Latter-day Saints, otherwise known as the Mormon church." She further went on to share how that faith background inspired Webb and her husband to start a family.

For those at the beginning of parenting a child with special needs, Webb shares, "Your child is so much more than whatever doctor or specialist can tell you on a piece of paper or screen. That’s just a small bit of information that’s a small piece of who they are." One powerful example Webb gives of this fact is the way her children constantly take her by surprise. She writes:

"When we were pregnant with our second daughter and we found out she was going to have these differences, we just didn’t know if she and her sister were going to have that typical sibling relationship. But immediately, our oldest daughter would come by and grab her [baby sister] under her arms and walk away with her and they would be giggling. . . .

"We started to see that the older one would come up to these games that allowed her sister to not just sit there but also participate. Never once when she was little — never once — did I ever hear her say something like, 'She’s not fun to play with.' The two of them would just laugh hysterically and they just had a super sweet, tender relationship from the start.

Just two sisters doing yoga. . Did you guys know April is Limb difference awareness month? No? You mean you were relying on me to give you that information? 😂 Well it’s true! Happy LDA month! . Sometimes I hear parents of kids with more minor limb differences declare, “He can do everything anyone else can do! Having a limb difference doesn’t slow him down at all!” And for many people that is true. But not for Lamp. And not for a lot of people with limb differences or other disabilities. Lamp CANNOT do everything other kids can do. She can’t run, walk, climb trees, etc. And sometimes it actually bums her out. But that’s her story to tell. . But here’s the thing... while she can’t do everything other kids can do, SHE USES HER BODY TO THE BEST OF HER ABILITY. Does her yoga look like Zuzu’s yoga? Nope. But she does it anyway. Does her hopping look like how other kids hop? Nope. But she does it anyway. You wanna know her favorite class at school? Gym. GYM! My limb different, wheelchair using daughter loves gym and does it her own damn way every single day. . I have no problem with parents who are excited that their disabled kids can do everything typical kids can do. That’s awesome. I just don’t ever want that able-bodied baseline measuring stick to be conflated with a person’s value and their ability to make meaningful contributions to the world. I don’t ever want the message to reach Lamp or her disable peers that says, “Well if you can’t do it like an able-bodied person don’t do it at all.” . Believe me, I am guilty of this mindset myself. There were so many things I assumed Lamp couldn’t do or wouldn’t try because her version would look different than the standard I was used to. Nope! I was wrong. . May we all use our bodies to the best of our abilities, and even when we are 100% sure it won’t look like how everyone else is doing it, let us say: NOPE! But I’m gonna do it anyway. 👊🏻 (Unless we’re taking about preforming major surgery or flying a plane... cuz you gotta ACTUALLY know how to do those things guys.🙄😂)

"I remember one time my oldest had just gotten these scarves at school because they had been learning to juggle. She sat down to teach her sisters and she never hesitated to think whether or not our middle daughter could do it. In my head, I might’ve been like, 'Oh, she probably can’t, so I’m not going to even bring it up,' but my oldest never thought that way and my middle one never thinks that way either. She doesn’t think about if she can do something. She finds a way to do it in her own way."

Read more about Amy Webb and how she became an advocate for families with special needs on People.