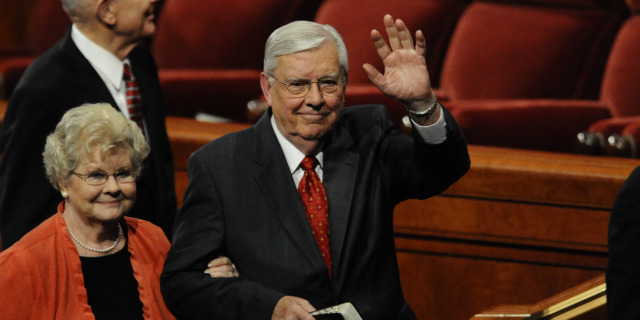 ‘She’s waiting for me’: This video of President Ballard talking about his late wife may melt your heart

In a new video released by Church News, President M. Russell Ballard remarks that in his 45 years as a General Authority, he’s traveled the world and there are not many places he hasn’t been—but “the greatest thing probably that ever happened was finding her and marrying her.”

President Ballard recalls in the video how he met his wife, Sister Barbara Ballard, who passed away on October 1, 2018. The two met at the University of Utah Hello Day Dance after President Ballard’s friend Richard Harris introduced him to Barbara Bowen.

“I was smitten just with her countenance and her smile,” President Ballard says. He later called her and took her out on the date. The two were married for 67 years and have 7 children, 43 grandchildren, and nearly 100 great-grandchildren.

► You may also like: President Ballard reassures the world will overcome COVID-19

“When I talk about October 1st, when she passed away, that was half of me, in a lot of ways, [that] went with her I think,” President Ballard says in the video. “It’s been a long two years. People ask me how it is, and I say it’s terribly lonesome at night. But I know where she is. She’s waiting for me, I hope.”