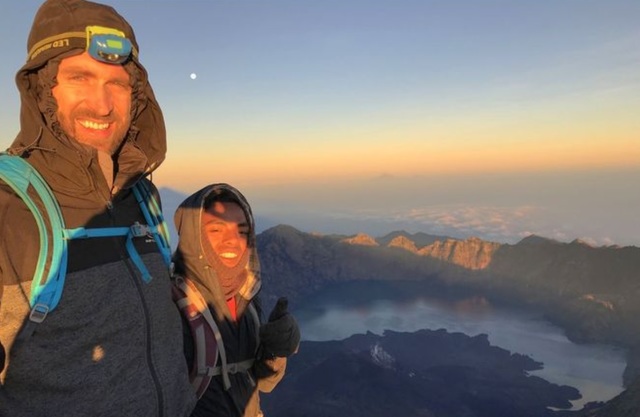 LDS father Craig Chilton was on top of a volcano when a 6.4-magnitude earthquake struck, and he thought he would never see his family again.

A Utah man was stuck on the top of a volcano when a massive earthquake struck an island in Indonesia.

Rescuers are still digging through the rubble in search of survivors after a 7.0 earthquake killed at least 98 people Sunday. More than 200 others were hurt and at least 20,000 people are now homeless, according to authorities.

That earthquake struck the island of Lombok. Just a week before, the same area was hit by a 6.4-magnitude quake. Craig Chilton, from Utah, was on top of a volcano on the island when it happened.

Chilton grew up in Bountiful and attended BYU. He’s lived in Thailand with his family for the past year. A week ago, he traveled to Indonesia and hiked to the top of Mt. Rinjani. That’s when he thought he was going to die.

Lead image from KSL of Craig Chilton and his guide at the top of Mt. Rinjani on the Indonesian island of Lombok, Saturday, July 28, 2018. Shortly after this photo was taken, the island was hit by a 6.4-magnitude earthquake.