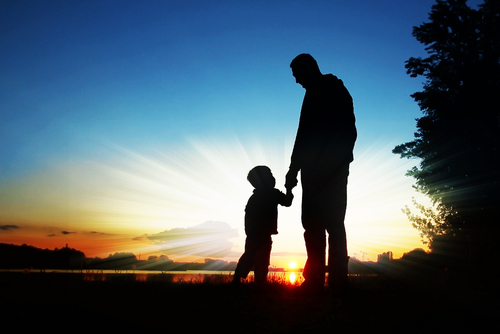 "Son of man" or "Son of God": Two Crucial Names for Christ We Keep Misunderstanding

In October 2017 general conference, Elder Christofferson gave a talk entitled “The Living Bread Which Came Down from Heaven" where he discusses how Jesus’s disciples were perplexed when He taught. "Verily, verily, I say unto you, Except ye eat the flesh of the Son of man, and drink his blood, ye have no life in you. Whoso eateth my flesh, and drinketh my blood, hath eternal life; and I will raise him up at the last day” (John 6:53-54).

The disciples were confused, wondering if they had to literarily consume the body and blood of Jesus. We understand that Jesus was speaking symbolically, that those who wish to be like Him must live like Him. The sacrament (where His blood and flesh are symbolically present) provides a weekly opportunity to recommit to follow in His ways.

The purpose of this article is not to explain the symbolism of the sacrament but to provide clarity around two phrases in the Bible. Why did God use the phrase “Son of man” in John 6 and what does it mean?

The phrases “Son of man” and “Son of God” actually mean the opposite of what we think they mean.

Son of God is a human person, that is, the king who has been adopted by God who grants authority to rule. The king demonstrates authority through power and miracles what God’s kingdom is like. Son of God often refers to Jesus’s first earthly rule.

Son of man is a heavenly person, who has divinely granted power to overthrow wickedness and to establish peace. The Son of man often refers to Jesus’s divine qualities to save us or the phrase can refer to the conditions of His millennial reign.

Let’s look at a few examples in scripture where this understanding could prove enlightening.

Old Testament scripture teaches that the Son of God is a kingly figure who has been chosen, established, ordained, and begotten of God, as seen in Psalm 2:6-7: “I set my king upon my holy hill of Zion. I will declare the decree: the LORD hath said unto me, Thou art my Son; this day have I begotten thee.”

Since God is the true King of heaven and earth, then the Son of God is the prince regent, or the King acting in His stead.

We see this principle taught in the story of King David who desired to build a house (i.e., a temple) to God. Instead, God promised David an everlasting house (i.e., a dynasty). Listen to the simple, yet beautiful father and son language that God used in making promises to David, designating the earthly King David (and his rightful heirs) as God’s son:

Because the king, as God’s son, represents God’s kingdom on earth, the king has unusual powers and abilities to demonstrate what God’s kingdom is like. Peace and justice reign, sorrow is removed, sin is purged, and people are made whole physically and spiritually. That is why when Jesus came as the Son of God—the true king on earth and God’s divine representative—He could demonstrate such mighty acts of miracles and healing. His healing acts and miracles demonstrated what the Kingdom of God is like.

With this in mind, let’s consider some familiar New Testament scriptures.

In Matthew 14, Jesus miraculously calms the winds on the raging Sea of Galilee. Immediately His disciples fall down to worship Him and say, “Of a truth thou art the Son of God” (vs. 33). Why would the disciples say to Jesus, after such a tremendous display of miraculous power, “thou art the Son of God”? Why not say, “Truly, thou art powerful” or “Of a truth, thou art a wonder worker”? Why use this specific phrase that, upon reflection, seems like a rather plain and generic phrase to describe any child of God? Because this phrase, “Son of God,” was a designation specifically for God’s divinely appointed Heir and King upon the earth, the one who had the power to demonstrate what the Kingdom of God is like, effect cures, wonders, powers, and miracles to testify of God’s reality.

In another instance in the Gospel According to Matthew, the devil tempts Jesus to throw Himself off the pinnacle of the temple and thereby demonstrate to the gawking onlookers that He is powerful enough to command the angels to catch Him:

“If thou be the Son of God, cast thyself down: for it is written, He shall give his angels charge concerning thee: and in their hands they shall bear thee up, lest at any time thou dash thy foot against a stone” (Matthew 4:6).

Notice how the devil challenges Jesus, the true King of the earth, who reigns not with blood and horror but with life-giving light, love, and peace. The devil says, “IF thou be the Son of God” (emphasis added). In other words, the devil says to Jesus, “Look, if you really are the King of the earth, representing the divine Father who has entrusted you with awesome and mighty power, well then, you have to convince us all by showing off your power as the King. The angels who are court ministers will do any and all your bidding, including saving you from a death fall. Come on! Prove to us that you are the divinely empowered king.”

Of course, Jesus with serene power speaks truth when He replies, “Thou shalt not tempt [try, test, require proof of] the Lord thy God” (Matthew 4:7).

We’ve seen examples that the phrase “Son of God” refers to a human person chosen by God as king and entrusted with powers to demonstrate the reality of God’s kingdom.

What does the phrase “Son of man” mean?

A cursory reading of the phrase “Son of man” would lead us to think that this phrase refers to any regular human being. The lower-case version of this phrase “son of man” does mean a human (see for example Psalm 8:4; 144:3).

However, the real meaning of “Son of man” (with “Son” capitalized and “man” lowercase”) is a heavenly character that comes down from on high to rid the world of wickedness, bringing peace and justice.

The first time “Son of man” appears in scriptures is when the wise Daniel saw “in the night visions, and, behold, one like the Son of man came with the clouds of heaven, and came to the Ancient of days, and they brought him near him. And there was given him dominion, and glory, and a kingdom, that all people, nations, and languages, should serve him: his dominion is an everlasting dominion, which shall not pass away, and his kingdom that which shall not be destroyed” (Daniel 7:13-14).

We learn from this scripture that the Son of man comes from down from the heavens and brings with Him the power of everlasting dominion.

This key scripture lays the groundwork for understanding many passages in the New Testament where Jesus refers to himself as the “Son of man.”

For instance, when Jesus discourses with His disciples about His identity at Caesarea Philippi, He asks, “Whom do men say that I the Son of man am?” (Matthew 16:13). Jesus concludes the instructive conversation by explaining His heavenly attributes that are represented by the title “Son of man.”

“For the Son of man shall come in the glory of his Father with his angels; and then he shall reward every man according to his works. Verily I say unto you, There be some standing here, which shall not taste of death, till they see the Son of man coming in his kingdom” (Matthew 16:27-29).

In this scripture, Jesus refers to Himself in His future, glorified, empowered, Second Coming state.

Many Jews understood that the Son of man would be a conquering hero from heaven, as we see these scriptures describe. However, the Jews, including some of Jesus’s disciples, couldn’t comprehend how such an unassailable hero could simultaneously be so humble and meek. Wasn’t the Son of man come to destroy the sinners? This thinking led James and John to confusion. When they saw a village reject Jesus, they urged Jesus to call down fire from heaven to consume the people (Luke 9:51-54).

Returning to Elder Christofferson’s referral to the words of Jesus in John 6, let’s take another look. We now understand that the Son of man represents Jesus’s heavenly characteristics. So when Jesus says, “Except ye eat the flesh of the Son of man, and drink his blood, ye have no life in you. Whoso eateth my flesh, and drinketh my blood, hath eternal life; and I will raise him up at the last day” (John 6:53-54), Jesus is referring to His divine characteristics, not His earthly characteristics, to save, heal, atone, and resurrect.

When Jesus speaks of Himself as “Son of man,” He is referring to His heavenly and divine attributes and that He has come to earth to establish justice and peace by abolishing wickedness. When Jesus is called the “Son of God,” He is referring to His earthly human attributes as a King who has been empowered by the Heavenly King (God Himself) to demonstrate the realities of God’s kingdom through power, healing, miracles, and glory.