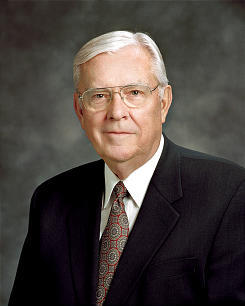 'Tapestry of God's hand' is evidenced in life of Joseph Smith

God's hand wove together a tapestry of prophets and reformers who prepared the world for the restoration of the gospel of Jesus Christ, said Elder M. Russell Ballard of the Quorum of the Twelve during the Joseph Smith Memorial Fireside in Logan, Utah, on Feb. 13.

"Tonight I want to explain to you that our Heavenly Father had His eye on the Joseph Smith family from the beginning of time up to 1820 when He and His Beloved Son visited Joseph and began the preparation for Joseph to become the Prophet of the Restoration of the fullness of the gospel in this last dispensation.

"In 1859 President Brigham Young said it this way: 'It was decreed in the councils of eternity, long before the foundations of the earth were laid, that [Joseph Smith] should be the man, in the last dispensation of this world, to bring forth the word of God to the people and receive the fullness of the keys and power of the Priesthood of the Son of God. The Lord had His eye upon him, and upon his father, and upon his father's father, and upon their progenitors clear back to Abraham, and from Abraham to the flood, from the flood to Enoch and from Enoch to Adam. He has watched that family and that blood as it has circulated from its fountain to the birth of that man. He was foreordained in eternity to preside over this last dispensation' " (Deseret News, October 26, 1859, 266).