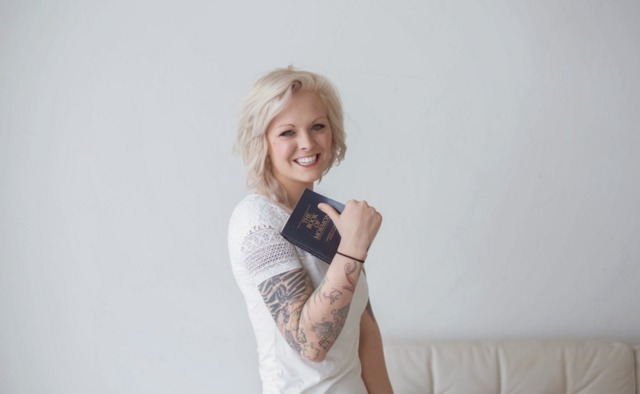 We love Al Fox Carraway and her amazing conversion story. Read here for a glimpse of what life was like for her as a young, new convert, and check out her new book More Than the Tattooed Mormon for more.

To choose happiness is to choose God. And once you choose God, ANYTHING IS POSSIBLE.

AS I ADJUSTED TO this new life [as a member of the Church], every day was the same. I woke up, and the time I used to spend walking to my dad’s house and eating lunch with him now turned into feeding my craving for know­ing more and doing better. I became thirsty for knowledge. I couldn’t stop reading and studying about the gospel. And when I had to stop, I couldn’t stop thinking about it. It was all a selfish pursuit more than anything. I was just chasing happiness. To choose happiness is to choose God. And once you choose God, anything is possible.

I got Preach My Gospel as a gift, and I studied out of it every day for hours until the pages started falling out from being written on and turned too often. I wanted make good use of my time, even on the road. I drove with a pocket hymnbook in my hands and glanced down at it while I was driving. I would sing along to these Mormon Taber­nacle Choir CDs the elders grew tired of and gave to me because I wanted so badly to learn the words. I was so eager to learn anything I could about the gospel in any degree.

What do you do when you just turned 21, you live in downtown Rochester, NY, where the nightlife is very active, and you don’t have any friends? Well, I’ll tell you what you do. I don’t know how many of you have found yourself home alone on a Friday or Saturday night and had those fleeting thoughts of, "I feel lame." Maybe you didn’t; maybe it was just me, because that’s how I felt every single Friday and Saturday night. The noise of house parties across the street and all of the many bars just a block over echoed loudly into my bathroom-sized apartment, where I was home alone. And it’s not that I missed the nightlife—I didn’t. I grew sick of that scene long before I met the elders, and partying was most definitely not ever my thing. But it was a clear and consistent reminder that those people at those parties had friends to see and stories to hear and experiences to live. And there I was, sitting home by myself in the middle of my floor, overhearing their laughter. So every Friday and Saturday night I spent on my floor by myself and made up church talks, for fun. Wild, right?

I loved learning more about the Church, and those nights spent on the floor studying and writing talks helped me in more ways than I can count, but it was hard. I hated coming home late at night, driv­ing by the thick of everyone’s social life, and walking into an empty apartment. There were too many times I’d drive home crying, abso­lutely hysterical because I didn’t want to be alone. There were plenty of nights I would plead to feel the Spirit, to make things easier, but I didn’t. I didn’t feel Him at times when I really needed to, and I would beg in tears just to feel peace. That happened consistently, and in those moments when I couldn’t feel the Spirit, I would think back on the times that I had felt Him, and I held on to that with the little energy I had left.

This didn’t make things easy, but it did better equip me to push forward. I read 3 Nephi 13:33: “Seek ye first the kingdom of God and his righteousness, and all these things shall be added unto you.” I read it and my whole body started to tingle. It was in that moment I knew that no matter what happens, if we put God first, our trials and losses, our lonely times will be made up to us. And it would be not just okay but better than what we ever had in mind—better than before the hard times had even started. It was this scripture that I held onto by my fingertips with all the energy I had left, when it felt like I was being pulled by my ankles in the opposite direction. It was this scripture that helped me to use this faith I wasn’t sure I had at times. If I wanted to know God and not just know of Him, the best way to do that wasn’t to get mad at Him for what was happening. I had to see what could come from remaining close to Him and holding on to His promises, no matter how dim and distant they seemed.

Ether 6 is a brilliant perspective on those times when we feel like we can’t catch our breath, when we catch ourselves asking, “Why? Why me? Why hasn’t this passed yet? Where is God, and why hasn’t He taken this from me yet?” In Ether 6, Jared and his brother were travel­ing in barges across the sea. Their journey lasted 344 days—probably much longer than they desired or anticipated. All the while, they were faced with “furious wind” and “great and terrible tempests,” many times being completely “buried in the depths of the sea” (verses 5–6). In moments like that, it would have been easy for them to ask, “Why isn’t this over yet? Why is this happening when we are following the Lord over to the promised land? God, why won’t you deliver us from this long and terrible storm?”

It was consistently so hard for them. The only thing more consis­tent than their storms, however, was the light. The light that came from the stones to “shine in darkness” (verse 3). Light that came directly from the Lord. And they made it! They were unharmed and protected, even in the worst of the worst. “When they were buried in the deep there was no water that could hurt them” (verse 7). “No monster of the sea could break them, neither whale that could mar them; and they did have light continually, whether it was above the water or under the water” (verse 10; emphasis added).

It was the Lord God, not Satan, who caused those furious winds to blow toward the promised land. Not once were they left alone. And though the storm seemed to be preventing them from progressing, it was actually helping them travel toward the place they needed to go—the promised land. Through all of that, they were always moving forward, always guided by God, and always having light. “The wind did never cease to blow towards the promised land” (verse 8). How easy it would have been to murmur and be upset at God. But when they finally arrived, they were not mad at God or upset by the storms from their journey but were filled with gratitude! Immediately when they reached land, the first thing they did was give thanks (verse 12). They left behind so much to go to new territory, acting just on faith. Yes, it was hard and probably incredibly scary, but when they got there, things were much better than where they were before, regard­less of the comforts they left behind and the trials they endured. After all they went through, they chose to give thanks. All of their discomfort didn’t matter; all their suffering was completely replaced with happi­ness, with gratitude. Because they made it. Because it was better than what they knew was available for themselves and greater than they even knew existed. That’s how it will always be with God. That’s the promise He has given to us, the promise we must never lose sight of: we will make it, and everything will be not just all right but better.

In all of the discouragement you may feel now—all of your sorrow, sadness, loneliness, darkness, and “storms” of life you may be traveling through right now—look to this story. Look to the light you do have, even if it seems as small as a stone. Look to the Lord. Look for His hand, even when you feel buried under the waves of mortal­ity. He is always there with you, always guiding you. It’s beautiful. We need to trust that everything God does is to help us receive greater blessings in life. When you are trying to do what God will have you do, know that those hard times are moving you closer to where He needs you to be. Our trials move us closer to where things are greater than they ever could have been before. Your stormy journey may be taking much longer than you desire or feel you have strength to endure, but do not let discouragement stop you from trying and turning to Him. Hard times will consistently be there—that won’t change—but so will Christ. And with Him we are able to overcome and conquer abso­lutely everything—every feeling of loneliness, discomfort, weakness, sadness, and temptation. Do not let your trials dictate and alter your perception of truths and promises given. Hold on to what you know; it will be your anchor in the storms. He will never give up on you. Do not give up on Him.

“Mine eyes are upon you, and the heavens and the earth are in mine hands, and the riches of eternity are mine to give. Ye endeavored to believe that ye should receive the blessing which was offered unto you; but behold, verily I say unto you there were fears in your hearts, and verily this is the reason that ye did not receive” (D&C 67:2–3).

For more, check out her new book More Than the Tattooed Mormon here.