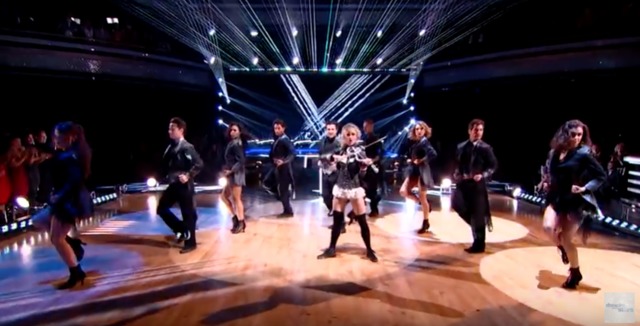 "That Was Criminally Good": Lindsey Stirling Takes to the Stage with Violin on "DWTS" Finale, Earns Perfect Scores

Lindsey Stirling did something a little daring last night on Dancing with the Stars, but it paid off big time.

With some help from a former DWTS dancer and current guest judge Julianne Hough, Stirling and her partner Mark Ballas earned a perfect score with their quickstep performance, a dance Stirling had previously struggled with.

“You scoundrels, that was criminally good,” judge Bruno Tonioli said after the performance.

But the real test came when Stirling decided to pull a surprise move during the freestyle dance. Though the move was potentially risky, Ballas remained supportive of Lindsey's decision.

"This is your moment. . . . The whole thing represents how you embody music and how you command it and own it," he said on the show.

Opening with what Hough described as a "Tim Burton, quirky, musical masterpiece of awesomeness," Stirling and Ballas took the stage.

But halfway through the performance, Stirling whipped out her violin for a performance no one was expecting.

Though it was a potentially risky move, the judges loved it.

"That was a modern classic extravaganza, conducted and orchestrated to perfection. It was so creative, so exciting. Bravo, maestro!" Tonioli said.

"Nobody cares what any of us have to say," judge Carrie Ann Inaba said as the crowd roared. "What is so incredible is it couldn’t have been a better showcase of your incredible uniqueness."

Receiving another perfect score for a total of 80 points, Stirling and Ballas face part two of the finales tonight to see if they will take home the mirror ball.

Watch ABC's Dancing with the Stars tonight to find out who will win.