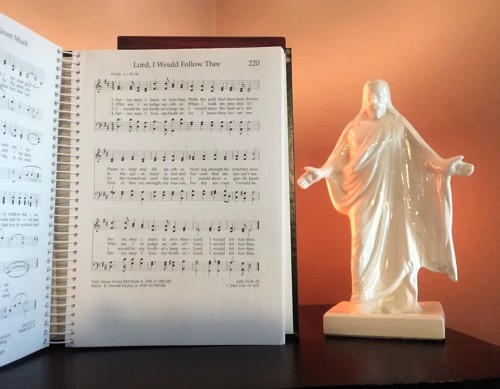 In the writing of the hymn “Lord, I Would Follow Thee” (Hymns, no. 220), I learned that the Lord’s timing is not our timing, and the Lord so often has plans of His own.

As preparation for the new hymnbook took place over a long period in the early 1980s, I was working now and then on assignments for the Young Women's organization or the Church Education System. Michael Moody was chairman of the Church Music Committee and over the hymnbook project, and every time I met him at the Church Office Building, he would urge me to send some lyrics to him.

I would go home excited to do so. But nothing would come. And, more strangely, I would forget! Several times this process repeated itself, and it was not until the book was completed that I recognized this strange pattern, which also included the fact I did not contact one of the young composers with whom I had worked, suggesting that we write a hymn together, nor did they contact me.

Thus, at length I received a phone call from Michael Moody, late on a Friday afternoon in March 1985, telling me that the hymnbook was nearly completed. My heart skipped a beat. Why had I let this precious opportunity slip through my fingers?

But he had called to ask if I would write some lyrics for a song about the Savior—about loving Him and striving to be like Him. Many thousands of potential hymns were being reviewed, and 92 would go into the hymnal that were new either in text, music, or both. But Brother Moody was loath to give up his desire for a song about the Savior that would be tender and powerful.

I did not have much to go on, and I didn’t have much time, for the lyrics were needed for a Monday morning meeting. I faced a busy weekend, which included a small daughter’s birthday. On Saturday night, I spent many quiet hours in writing and in prayer, with some additional last efforts on the Sabbath.

I phoned Michael Sunday evening as he had requested, and read the lyrics to him. He is a gentle, guileless man, and the phone was quiet for a moment or two, and then he said, “I knew you were the one.”

How that was so, I am still not sure. I do think what is important about this hymn is that I drew from my own experiences—and the writing of the hymn deeply influenced me.

One strong example: Near this time my little sister, Laura, had given birth to a beautiful Down syndrome baby girl, Sarah, who had a heart condition that needed to be fixed by surgery if she was to live. She did not make it long enough but died suddenly and quietly in her mother’s arms when she was 3 months old.

The day after Sarah’s death, my sister asked me to go shopping with her to buy a small locket for the baby and some other needful things. We walked through the Murray mall, and we looked just like two young women out shopping. I wanted desperately to run ahead and entreat the clerks, “Please be kind to my sister. Her baby just died yesterday!”

I could not do that, of course, and some were kind, and some were not. But that experience had a great impact on me. I found myself watching people. When someone waiting in line was being coarse or boorish, or a person on the street being rude, I would look at them and think, “How do I know what they’re suffering? What if they just lost their job, or found out they have cancer? What if someone they love has died?” I became more patient and kindly and forgiving of others. From this came the line: In the quiet heart is hidden sorrow that the eye can’t see.

My experience was repeated one week later when Brother Newell Dayley was given my words and asked to compose the music as quickly as possible, for the hymnbook was in the final stages. He, too, faced a challenging weekend, doing workshops at a BYU conference in southern Utah and having to somehow fit this challenge in.

The hymn became a living thing because of the beauty of the music and the perfect harmony between the lyrics and the tune, which harmony was created by the spirit as well as the skill of this gifted man.

This was the hymn that, for some reason, I was supposed to write. If I had sent in something else, it would not have worked. Therefore, this seeming veil was drawn over until the time and circumstances were right.

What is important to me is that I know from whence this came, and I do not forget. I am still sincerely trying to do what the Lord desires: live to be worthy of the gift, knowing how lovingly Heavenly Father showers gifts upon his children and delights in blessing our lives.

Susan Evans McCloud is a freelance writer, is a student of LDS and Utah history, Scottish history and literature, and has a son who plays the bagpipes and a daughter studying Gaelic in Glasgow, Scotland.