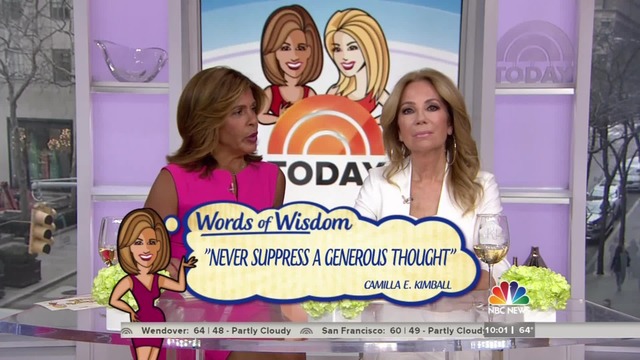 On Wednesday, Latter-day Saints tuning into Today may have seen a familiar name flash across their screen—Camilla E. Kimball, wife of President Spencer W. Kimball.

As the Deseret News notes, this is not the first time Kotb and Gifford have referenced this quote, having mentioned it in a New York Daily News article focused on spreading kindness and making service a trending topic.

And it also isn't the only time a Church figure has been quoted on a TV show. Steve Young quoted Joseph Smith on ESPN's Pardon the Interruption.

When asked to give his insight into why the Detroit Lions needed an independent locker room, Young provided a "famous quote," one given by Joseph Smith when he was asked by a member of the legislature how he governed so many people with such order: "I teach them correct principles, and they govern themselves."

In 2016 CBS's Criminal Minds, a TV drama fraught with graphic violence that delves into the twisted psyches of criminals, unexpectedly quoted James E. Faust: "The influence of a mother in the lives of her children is beyond calculation."

And while not using the quote on a TV show, Hilary Clinton quoted Sister Rosemary M. Wixom in an exclusive article written for the Deseret News, saying, "As Sister Rosemary M. Wixom once said, 'As individuals we are strong. Together, with God, we are unstoppable.' Sister Wixom is right, and she’s not alone. Generations of LDS leaders, from Joseph Smith and Brigham Young to Gordon Hinckley and Thomas Monson, have noted the infinite blessings we have received from the Constitution of the United States."

And let's not forget when P.Diddy, LL Cool J, and Pharrell Williams all quoted LDS prophets or apostles. It's encouraging to see the positive messages of Church leaders cropping up in places we least expect it and influencing others around the world.

Lead image a screenshot from Today