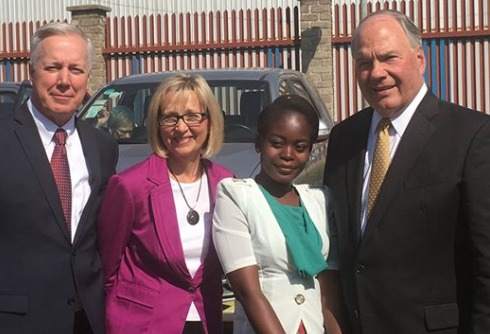 "We Are Not Your Merchandise": Elder Rasband's Prompting That Led to One Woman's Powerful Testimony of Marriage

Following promptings can sometimes be uncomfortable, especially when we are prompted to ask someone else to do something.

But when Elder Ronald A. Rasband had a prompting to ask a young single woman to share her testimony, he did it. And when she shared her "stirring and beautiful" testimony in front of 5,000 of her peers, the experience was unforgettable.

I often am amazed at how the Lord uses each of us to help bring about His purposes. I received a powerful reminder of this last week during my visit to the Democratic Republic of Congo.

At the meeting, I followed up on this prompting and invited Anastasia to speak to the group for a few moments. Little did I know what a stirring and beautiful testimony she would share.

Before I go on, you should first understand a little bit about the practice of bride price that is still prevalent among many in her country. Bride price involves a sum of money being paid by a would-be groom to the family of his bride-to-be. Leaders of The Church of Jesus Christ of Latter-day Saints and many other Christian churches and civil societies in Africa have spoken against the practice, as the Lord’s will is for men and women to be equal partners in courtship and marriage.

As Anastasia walked to the front of the chapel and stood in front of 5,000 of her peers, she spoke to all parents and said something I will never forget:

“We are not your merchandise.”

She went on to share powerful testimony of her desire to enter into an equal partnership with a husband, live the celestial law of marriage, and ultimately receive all the blessings promised to those who live as faithful followers of Jesus Christ.

As Anastasia spoke with power and with faith, a profound hush fell over the congregation and the Holy Ghost testified of the truthfulness of the words she was sharing.

When it was my time to speak, I brought Anastasia back up with me and I let everyone in attendance know that she had spoken what the Lord wanted for them to hear and that I was only a second witness.

How grateful I am for the great faith of Anastasia and of many other strong, faithful, and humble followers of Jesus Christ in Africa and around the world. Truly there is much we can learn from one another.