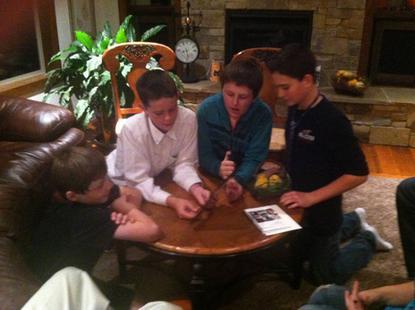 'What If I Drop a Tray?' Answering Important Questions from a New Deacon

My only son participated in passing the sacrament for the first time last Sunday. Since he’s almost as tall as me and now has such sacred responsibilities, I guess it’s time to admit that he’s growing up.

He has been anxiously awaiting this day, not only because the Primary program was absolute torture for him a few weeks ago, but also because he’s got a great quorum of friends to welcome him.

The day after he was ordained, the deacons quorum president arranged to come to our home with the two other deacons in our ward. They were chauffeured by our Young Men president and deacons quorum advisor, and my husband sat in since he’s the Scout leader, but it became very apparent that this meeting was going to proceed by kid-agenda because the men didn’t say a word. Nearby, I took an extra long time spreading frosting on cinnamon rolls so I could be a silent witness from the kitchen.