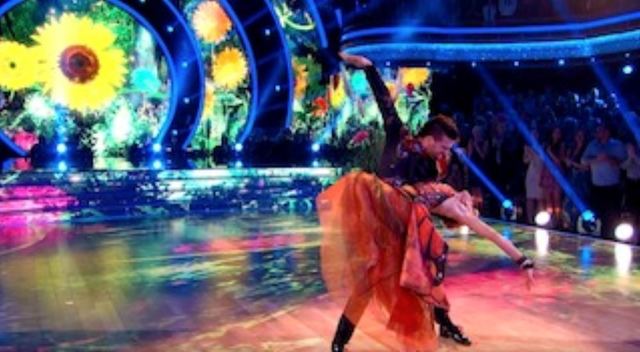 "You Have This Natural Elegance": Judges Praise Lindsey Stirling's Latest "Dancing with the Stars" Performance

After a smashing performance last week that left Lindsey Stirling and her dance partner, Mark Ballas, tied for first place, the dancing duo did not disappoint judges this week on Dancing with the Stars.

The two began their week two appearance on the show with their "caterpillar quickstep," keeping up the ballroom classic while transforming from drab caterpillar wear to colorful costumes in a creative take on the metamorphosis of a butterfly.

And the symbolism of the dance was especially meaningful for Stirling.

"In my own past, I struggled with depression and there was a time where I felt so ugly and so worthless," Stirling says on the show. "I remember thinking as I worked through therapy feeling like I would rather remain a caterpillar than fight in this cocoon. I made it through the really dark times and I want to show that there is light at the end of the tunnel."

And judges were impressed with Ballas's and Stirling's creative, symbolic take.

"Creative choreography. I love it," show judge Len Goodman said. "It was light; it was bright; it was fun; it was entertaining."

Though judges did point out Stirling's neck came a little forward during the performance, resulting in a 21 out of 30 score, judge Carrie Ann Inaba shared what she loves about Stirling as a dancer.

"What I love about you, is you have this natural elegance," show judge Carrie Ann Inaba shares. "You trust Mark. . . . together, you are so great."