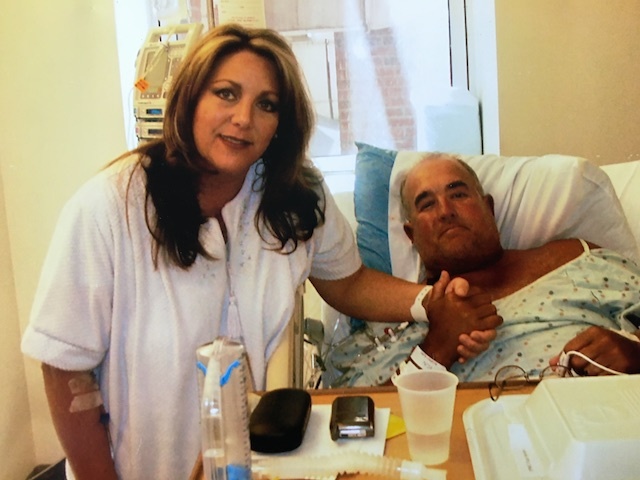 For Jim, those three words would change his life in so many ways.

The first time Jim heard those words was when his mother was diagnosed with the disease, a disease where fluid-filled sacs cover the kidneys until they can no longer function. There were only two options for Jim's mother: a lifetime of dialysis, where she would be dependent on machines to clean her blood for the rest of her life, or a kidney transplant.

It was a devastating diagnosis.

"I could tell that she was struggling with it and my heart ached wondering what would happen to her," Jim says in a This Is the Gospel podcast.

Unfortunately, neither Jim or any of his three siblings were matches to be kidney donors. Instead, Jim and one other sibling discovered that they also had the disease.

Jim was healthy at the time of his diagnosis and wasn't very upset about what might be in his future. But as he watched for three years while his mother underwent dialysis before receiving a kidney, he feared he would suffer a similar fate.

As the years went by, Jim was eventually put on a kidney donor list as a preemptive measure. However, like his mother, it could take years to receive a kidney, and Jim still faced the possibility of several years of dialysis.

Hoping to avoid this, Jim's two siblings who didn't have the disease were tested as possible donors. Though the siblings were related to Jim, there was no guarantee one of them would be a match. However, Jim's sister was a perfect match and agreed to donate her kidney to Jim.

"Now, this was a time that, unfortunately, I have to confess that I wasn't living the gospel as I should have," Jim says. "It had been years since I had really connected or reconnected with my Church roots."

Knowing the great sacrifice that his sister was about to make for him by freely giving up one of her kidneys and undergoing invasive surgery to do so, Jim sought out spiritual comfort and reconciliation. Jim decided he would drive to the Sacred Grove in Palmyra, New York, which wasn't far from where he lived at the time, to seek for peace.

On that day, there were no visitors walking around or taking pictures. It was the off-season, and Jim was able to feel the true stillness and reverence of such a sacred place.

"It had a great calming effect on me," Jim says. "I don't believe I had a 'burning of the bosom,' or an earth-shattering experience in the grove, but it was quiet and reverent. And although I was comforted, I also felt that I needed to change some things in my life."

After this peaceful experience, Jim resolved his guilt and allowed for the surgery to take place.

But on the day of the surgery, the hospital was a madhouse. A nurse was barking out orders from behind a large desk in the preoperation room while medical staff and patients flooded the halls. It was noisy, it was crowded, it was everything but peaceful.

Amid the chaos, Jim was wheeled in on a gurney and placed next to his sister before surgery. Even with all the noise and constant flow of people moving around, Jim felt a strong sense of peace as he watched his sister answer the same routine questions she had been asked many times before as they prepared for the surgery.

In an almost surreal moment of calm, Jim turned to his sister, "I said, 'Hey, I wanted you to know how much I love you,'" Jim says. "And she said, 'I love you too.'"

Both had received priesthood blessings before the surgery, Jim says, and neither felt afraid of the complications that might arise during surgery or the recovery afterward. They both had confidence in the power of the blessings they had received.

But Jim couldn't resist turning to his sister one more before they wheeled her away to the operating room, "I think I remember her being somewhat annoyed, and I said, 'Thank you,' Jim says. "And she looked back and me and said, 'You are welcome.'"

For Jim, this was a moment in time between him and his sister that was full of love and sacrifice. A moment where both knew exactly what was on the line: a new life for Jim at the cost of his sister's kidney.

Jim says he has never resolved in his mind or heart the willing gift of his sister. It was an unselfish gift that he says he will be forever grateful for.

As Jim thinks about the Atonement of the Savior, he often thinks of this willing, unselfish sacrifice his sister made for him. He also thinks of that exchange between him and his sister in the preoperation room.

"My hope is that someday when I stand before the Savior, I can apologize for the suffering my sins caused Him," Jim says. "And I hope to say, 'Thank you.' And I ultimately hope to hear, 'You are welcome.'"

Listen to the full podcast episode below or click here to view the transcript and show notes for this episode.