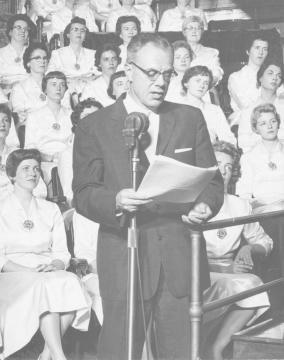 Music and the Spoken Word, the longest running nationwide radio broadcast in the United States, was inducted into the National Radio Hall of Fame Saturday, 6 November 2010. The honor of acceptance was by Mack Wilberg, conductor of the Mormon Tabernacle Choir.

“This is especially significant for us,” explains Wilberg, “not only because of the very talented individuals who were also nominated with us in the National-Pioneer category, but also because the selection was determined by a vote of the American listening public.” Wilberg will accept the honor on behalf of the choir from Bruce Reese, chairman and CEO of Bonneville International Corporation.

“Induction into the National Radio Hall of Fame represents a wide variety of programming formats,” explains Bruce DuMont, chair of NRHF and the associated Museum of Broadcast Communications. “Over the years there is no better example of the quality, the popularity and the longevity of our selection criteria than Music and the Spoken Word. The message and spirit they bring to their program is the epitome of what the Radio Hall of Fame is about.”
Read the rest of this story at newsroom.churchofjesuschrist.org