In 2012, Tom Brokaw performed with the Mormon Tabernacle Choir along with Alfi e Boe and special guest Gail Halverson, otherwise known as “The Candy Bomber.” Widely known for his 22 years as a news anchor on NBC Nightly News, Brokaw is also an author of several books and has received every major award in broadcast journalism, from the Peabody Award to several Emmy Awards. He has been inducted into the Television Hall of Fame and received the Presidential Medal of Freedom in 2014.

Of his time with the Tabernacle Choir, Brokaw shared the following in a special behind-the-scenes interview: “The idea of standing in front of the choir and orchestra with Mack [Wilberg] at the podium and his baton in hand is just one of those great privileges. I’ve often said that, as a journalist, I’ve been able to fulfill my childhood dreams of wanting to be in the front row of history where it’s being made. And the Mormon Tabernacle Choir and orchestra is certainly part of that for the American culture. It is a fixed part of who we are.” He added, “The Mormon Tabernacle Choir, especially in the Midwest, was always an integral part of Christmas. You’d listen to it on the radio in the morning or play your long play records in those days. I worked at a radio station while I was in high school, and I was always grateful for the choir and orchestra because I could just put on the long play Christmas album and then sit back and everybody would be absolutely entertained and moved by what they were hearing.” 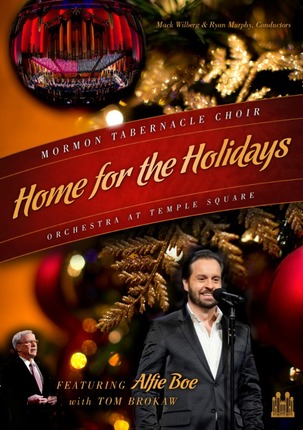 As seen and heard by more than 80,000 people in the LDS Conference Center, Home for the Holidays is the live recording of The Tabernacle Choir’s 2012 Christmas concert. This year’s release features internationally acclaimed TV personality Tom Brokaw and Tony Award–winning Les Miserables tenor Alfie Boe. The Choir also welcomed surprise-guest Gail “Hal” Halvorsen, the renowned Candy Bomber of World War II. Together with the Tabernacle Choir and Orchestra at Temple Square, these three special guests delivered an unprecedented excitement to the stage that brought all in attendance to their feet more than once during the night.