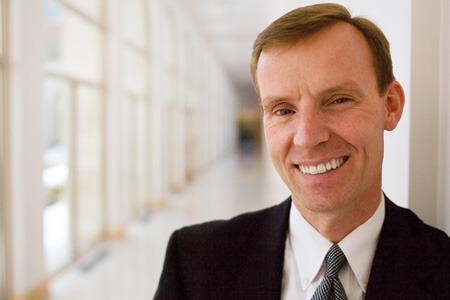 10 Favorite John Bytheway Jokes + What You Can Learn from Them

Did you know that John Bytheway's renown humor doesn't come naturally? He explains:

I have to add the humor later. I have to figure out what I’m trying to say, what’s most important to say, and then my secondary question is, “Now how do I get the person who doesn’t want to listen to be engaged?” The first question is always “what ought to be taught?” the second is always “how do I teach it so I don’t lose any of those who are most at risk?” So the humor doesn’t come naturally—I have to think later, “this part’s getting boring—what do I do?” There’s other people that the humor just flows, but I have to work on it.

His work is certainly noticeably--and appreciated. Check out these jokes from Brother Bytheway that not only will make you laugh but will teach you an important gospel lesson, too.

Right away, you just think, “What were they thinking?” I wouldn’t wear a loincloth anywhere, but would you wear one to a war? “Let’s see--I’m going to war tomorrow, what should I wear? There’s gonna be lots of sharp pointy things. Ah the loincloth! Got it! And some sunscreen. Maybe some extra safety pins, right." I dunno. You can just hear his wife: "You're not going out in that, are you?"

Lesson to learn: Being prepared, spiritually and physically, will help you face life's battles.

[The Lamanites] are afraid because of [the Nephite's] armor. . . . They come out, they see the Nephites, and they're going to attack, and then they say, "They have armor. Let's attack Manti." And they go that way instead. . . . But without their armor, they didn't stand up very well.

Quoted from Righteous Warriors: Lessons from the War Chapters in the Book of Mormon

Lesson to learn: Being content with what you have leads to happiness.

Quoted from How to be Totally Miserable: A Self-Hinder Book

3. That Should Go on a Card

The words [on the card] were, “Dear Kim, Happy anniversary of our first date.” It’s really good, huh? I should write for Hallmark, shouldn’t I?

Watch the whole story for more jokes and the lesson to be learned:

4. A Fitness Plan We Can Get Behind

Happy people giggle, guffaw, chortle, snicker, and even snort. (Snorters cover their mouths in surprise and embarrassment, and then laugh even harder.) If laughter is the best medicine, these people have free refills at the funny pharmacy. Have you ever laughed so hard that your stomach was sore the next day? There’s an exercise program ideas in there somewhere: “Laugh Your Way to Washboard Abs.”

Lesson to learn: Life it to be enjoyed, not just endured

Miserable people think life is too serious to laugh about, while happy people know that life's so serious they have to laugh to survive.

Quoted from How to be Totally Miserable: A Self-Hinder Book

“What do you see down there?”

Lesson to learn: The prophets have a better perspective.

They put people in the towers. Why do you do that? Oh, this is a great image! Ezekial 3:17. This is God talking to Ezekial, son of man. He says, "I have made thee a watchman unto the house of Israel. Therefore, hear the word at my mouth and give them warning from me.” Boyd K. Packer’s biography which I read and loved is called Watchmen on the Tower. The tower is where prophets are that can see far off.

Quoted from Righteous Warriors: Lessons from the War Chapters in the Book of Mormon

“There are three things that men want to know when engaging in a conversation with a woman. One, is it going to be painful? Two, how long is this going to take? And three, what do you want from me when this conversation is over?”

Lesson to learn: Understanding isn't the same for everyone

Watch the whole story for more jokes and the lesson to be learned:

Listen to more with the What's In Your Backpack? MP3 download

8. The End of the World as We Know It

"You just don't get it! If I don't go to this dance, I'll just die! It will be the end of the world!" Yes, of course, the cemeteries are full of girls who "just died" because they didn't go to a dance. It's been the leading cause of teenager deaths for years. And as we can all see, the world ended the first time someone missed a prom back in 1953 and has been ending just about every month since.

One day when I was a senior in high school, I thought about some of those people I had looked up to in junior high. Where did they go? Many of them weren't in the limelight anymore. Something happened. They were the ones who had started dating early, who had started partying before everyone else. They got ahead of themselves, and many of them blew it.

Quoted from Are Your Standards Fences or Guardrails?

9. How Firm a Foundation

Let's say you're going to build a house, and you're looking for a nice piece of land. Your real-estate agent fumbles through his listings and says,

"Hmmm. Do you have anything with a better foundation?"

"I want something that will remain standing through rainstorms and floods and wings . . . you know, something rock solid."

"Yes, of course; I thought you would take that for granite." (I know, dumb joke.)

Lesson to learn: Choose what you build on wisely

When you're looking to build something important, something that you hope will remain standing, you want to build on solid ground. . . . Well, we know of an experienced "ancient realtor" who can tell us where to build! He recommends a place for building not only self-esteem, but a whole life! His name is Helaman, and here's what he said to his sons, and to all of us:

And now, my sons, remember, remember that it is upon the rock of our Redeemer, who is Christ, the Son of God, that ye must build your foundation; that when the devil shall send forth his mighty winds, yea, his shafts in the whirlwind, yea, when all his hail and his mighty storm shall beat upon you, it shall have no power over you to drag you down to the gulf of misery and endless wo, because of the rock upon which ye are built, which is a sure foundation, a foundation whereon if men build they cannot fall.

Quote from A Crash Course in Teenage Survival

Sometimes, after our class discussion, my students would walk out the door mutter, "I'm still as confused as ever," to which I would reply, nodding wisely, "Yes, but now we're confused on a higher level and about more important things."

Lesson to learn: Progress can be hard to measure--but it's still progress.

Someone once said, "What we obtain too easily, we esteem too lightly." I suppose you've got to pay the price to obtain some blessings, but that's okay. We like blessings, and we're not afraid of work.

Quoted from Isaiah for Airheads