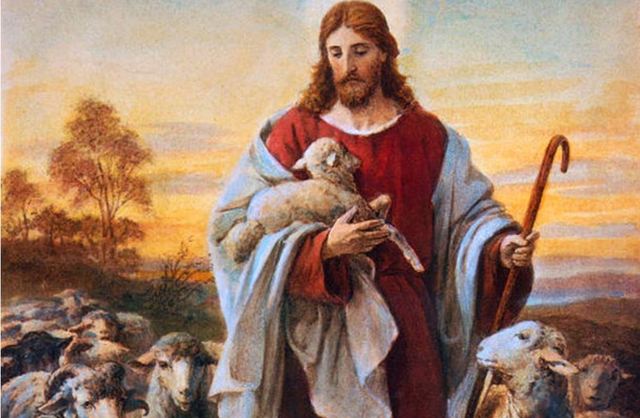 President Russell M. Nelson issued the following challenge to the youth of the Church in 2017:

“This may seem like a large assignment. But I encourage you to accept it. If you proceed to learn all you can about Jesus Christ, I promise you that your love for Him, and for God’s laws, will grow beyond what you currently imagine. I promise you also that your ability to turn away from sin will increase. Your desire to keep the commandments will soar. You will find yourself better able to walk away from the entertainment and entanglements of those who mock the followers of Jesus Christ.”

While the challenge is from 2017, it’s never too late to learn more about our Savior and President Nelson’s invitation has not expired. To help you better come to know Christ, here are 10 lesser-known titles or names of our Savior, as found in the scriptures, to aid your studies:

1. Bishop of Our Souls

Scripture: “For ye were as sheep going astray; but are now returned unto the Shepherd and Bishop of your souls.”  —1 Peter 2:25

Most of us are familiar with bishops. We see them weekly sitting on the stand presiding over sacrament meeting.

Our bishops are judges in Israel, and Christ is the ultimate bishop who presides over all of us and over the Church. We can turn to Him for counsel and comfort.

"Greek episkopos, meaning 'overseer,' an office or position of responsibility. Hence, Jesus is called the 'Bishop of your souls' (1 Pet. 2:21–25)."

Like our ward bishops, Christ is there to help us and provide guidance while we struggle through mortality; however, He is also our Savior and Redeemer and it is only through Him that we can repent and be made clean.

Scripture: “And one of the elders saith unto me, Weep not: behold, the Lion of the tribe of Juda, the Root of David, hath prevailed to open the book, and to loose the seven seals thereof.” —Revelations 5:5

"In certain scriptures Christ is referred to as the 'Root of David' (Revelation 5:5; 22:16). According to Elder Bruce R. McConkie, 'This designation signifies that he who was the Son of David was also before David, was pre-eminent above him, and was the root or source from which the great king in Israel gained his kingdom and power'" (Mormon Doctrine, p. 657; see also Matthew 22:44–45).

"Jesus is also called the 'Root of David.' The Gospel writers frequently emphasized that Jesus was a descendant of King David (see Matthew 1:1; Mark 10:47; Luke 1:32; John 7:42). Later in John’s revelation, Christ Himself declared, 'I am the root and the offspring of David' (Revelation 22:16). A root provides lifesaving water and nourishment to a plant﻿—such was the mission of Jesus Christ to all who accept Him as their Savior and Redeemer (see John 15:1–8; see also Isaiah 11:1; 53:2)."

3. Lion of the Tribe of Judah

Scripture: “And one of the elders saith unto me, Weep not: behold, the Lion of the tribe of Juda, the Root of David, hath prevailed to open the book, and to loose the seven seals thereof.” —Revelations 5:5

"'Lion of the tribe of Juda' is a fitting title because a lion is majestic and powerful and because the Savior was born through the lineage of Judah (see Genesis 49:8–10; Matthew 1:3; Hebrews 7:14). The title Lion of Judah is a stark contrast to the meek and sacrificial 'Lamb' mentioned in verse 6. These two images convey that Christ possesses both majesty and meekness."

4. The Author and Finisher of Our Faith

Scripture: “Looking unto Jesus the author and finisher of our faith; who for the joy that was set before him endured the cross, despising the shame, and is set down at the right hand of the throne of God.” —Hebrews 12:2

Some translations of the Bible replace "author and finisher" with "founder and perfecter," translations that illuminate important roles of our Savior Jesus Christ. Jess L. Christensen, then-Institute of Religion director at Utah State University, said in 1986:

"When our Father in Heaven presented his plan of salvation, Jesus sustained the plan and his part in it, giving the glory to God, to whom it properly belonged. Lucifer, on the other hand, sought power, honor, and glory only for himself (see Isa. 14:13–14; Moses 4:1–2)."

Not only was Christ key in the creation of the plan, but He was also vital in its fulfillment.

"The Prophet Joseph Smith taught that the Savior’s Atonement was essential to the plan of salvation: 'The fundamental principles of our religion are the testimony of the Apostles and Prophets, concerning Jesus Christ, that He died, was buried, and rose again the third day, and ascended into heaven; and all other things which pertain to our religion are only appendages to it' (Teachings of the Prophet Joseph Smith,sel. Joseph Fielding Smith [1976], 121)."

Christ is an Author, Creator, Founder, and the Firstborn, but He also walks with us on our faith journey and makes eternal life possible as the first raised from the dead, the Anointed, the Finisher of God's work, and the Perfecter.

► You may also like: New Testament Lesson 37: "Jesus Christ: The Author and Finisher of Our Faith"

5. Image of the Invisible God

Scripture: “Who is the image of the invisible God, the firstborn of every creature: For by him were all things created, that are in heaven, and that are in earth, visible and invisible, whether they be thrones, or dominions, or principalities, or powers: all things were created by him, and for him.” —Colossians 1:15-16

Elder Robert D. Hale put it best when he said, "God and Christ are literally a Father and a Son—separate, distinct, individual beings who are wholly unified in Their purpose."

God and his Only Begotten are so unified that they are sometimes referred to as being "one" in the scriptures (John 10:30).

Jesus Christ came down to earth and had a body of flesh and blood—made in the likeness of God—and did the Father's will in all things. Thus He was the physical manifestation of His Father's will during His time on this earth.

6. The First Born of Every Creature

Scripture: “Who is the image of the invisible God, the firstborn of every creature: For by him were all things created, that are in heaven, and that are in earth, visible and invisible, whether they be thrones, or dominions, or principalities, or powers: all things were created by him, and for him.” —Colossians 1:15-16

"Jesus is the firstborn of the spirit children of our Heavenly Father, the Only Begotten of the Father in the flesh, and the first to rise from the dead in the Resurrection, 'that in all things he might have the preeminence' (Col. 1:13–18)."

Scripture: “Then said Jesus unto them again, Verily, verily, I say unto you, I am the door of the sheep.”

Throughout the scriptures disciples of Jesus are often referred to as sheep and Christ as our shepherd. He guides and watches over us during our time on earth, and if we follow Him, we can be saved.

"I am the door: by me if any man enter in, he shall be saved, and shall go in and out, and find pasture."

Christ made an infinite and eternal atonement for all mankind; He is the only door through which we can return to our Heavenly Father and be saved.

In his book Because of the Messiah in the Manger, Brad Wilcox spoke of what he learned about shepherds in the Holy Land from a local Palestinian guide.

"At night, [shepherds] brought the flocks together [into caves] to protect them from wolves, jackals, and robbers. Some of the caves held more than 200 sheep. Several shepherds would work together to block the front of a cave with stones, leaving a narrow entrance through which only one or two sheep could pass at a time. The shepherds would then lead the sheep into the fold and rotate guard duty, taking turns sitting so as to block the entrance to the cave while the others slept. Sam said, 'The shepherd on duty didn’t just guard the door. He became the door.' No wonder the Savior once said, 'I am the door of the sheep' (John 10:7) and 'He that entereth not by the door into the sheepfold, . . . the same is a thief and a robber' (John 10:1)."

Scripture: “The sceptre shall not depart from Judah, nor a lawgiver from between his feet, until Shiloh come; and unto him shall the gathering of the people be.”  —Genesis  49:10

"The name as found in Gen. 49:10 has been regarded by many biblical scholars as a prophecy of the coming of Messiah. This interpretation is confirmed by JST Gen. 50:24 (Appendix) and was fulfilled in Jesus Christ’s being literally of the lineage so as to be the heir to the throne of David. Shiloh can be read as a short form for 'He to whom it belongs'; for such a phrase referring to the Messiah, see Ezek. 21:27."

Some alternative translations of Shiloh are "Peace," "the peaceful one," and  "he who has been sent."

The parable in John continues:

"Every branch in me that beareth not fruit he taketh away: and every branch that beareth fruit, he purgeth it, that it may bring forth more fruit. Now ye are clean through the word which I have spoken unto you.

"Abide in me, and I in you. As the branch cannot bear fruit of itself, except it abide in the vine; no more can ye, except ye abide in me. I am the vine, ye are the branches: He that abideth in me, and I in him, the same bringeth forth much fruit: for without me ye can do nothing" (John 15: 2-5).

"In this allegory are two important principles: First, we must be grounded in Christ. If we are not, we will not be fruitful (see John 15:4). If our lives are not in harmony with the teachings of the Savior, it is no more likely that we will bear good fruit than that a branch cut off from a vine will bear fruit. Second, even when we are living righteously, we still need the Gardener, who knows us so completely and sees beyond what we see, so that He can purge, or prune and purify, us (see John 15:2). While at times this pruning may seem hard to bear, it is only through this process that we will become more fruitful."

10. The Amen, the Faithful and True Witness

Scripture: "And unto the angel of the church of the Laodiceans write; These things saith the Amen, the faithful and true witness, the beginning of the creation of God;” —Revelations 3:14

The Church's Guide to the Scriptures states the following:

"Means 'may it be so' or 'so it is.' Amen is said to show hearty or solemn acceptance and agreement (Deut. 27:14–26) or truthfulness (1 Kgs. 1:36). Today at the end of prayers, testimonies, and talks, those who heard the prayer or message say an audible amen to indicate agreement and acceptance.

Christ did the will of the Father in all things and thus gave "solemn acceptance" to His plan, even when He knew that meant enduring great suffering (see Luke 22). In this way, He is the Amen.

"And behold, I am the light and the life of the world; and I have drunk out of that bitter cup which the Father hath given me, and have glorified the Father in taking upon me the sins of the world, in the which I have suffered the will of the Father in all things from the beginning."