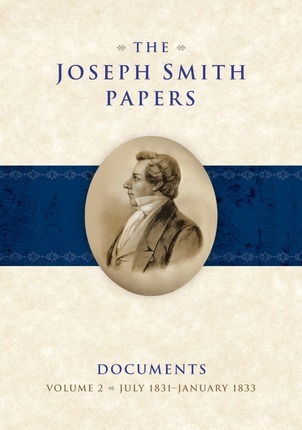 1.    The “preface” to the Doctrine and Covenants (section 1) was given only after William E. McLellin, Oliver Cowdery, and Sidney Rigdon attempted to write a preface themselves. Section 1 of the Doctrine and Covenants was revealed in November 1831 at a conference where Joseph Smith and other Church leaders decided to publish Joseph’s revelations as the Book of Commandments. According to William E. McLellin, he, Sidney Rigdon, and Oliver Cowdery were appointed by the conference to write a preface for the publication. When they presented the draft to the conference, the conference participants “picked it all to pieces” and asked Joseph to request a preface from the Lord. Joseph and those at the conference then prayed, after which Joseph dictated the preface “by the Spirit” while “sitting by a window.” According to McLellin, “Joseph would deliver a few sentences and Sydney [Rigdon] would write them down then read them aloud, and if correct, then Joseph would proceed and deliver more.” In this way, McLellin declared, “the preface was given.” Section 1 served as the preface for both the Book of Commandments, whose printing was interrupted in July 1833 by mobs in Jackson County, Missouri, and the Doctrine and Covenants when it was first published in 1835.

2.    Church leaders used an orderly process to determine who would build up the city of Zion in Jackson County, Missouri. After Jackson County had been designated by a July 1831 revelation as the location of the city of Zion, other revelations directed how decisions would be made as to who would go to Missouri. Section 58 in the Doctrine and Covenants, revealed on 1 August 1831, stated that after Edward Partridge, the bishop in Zion, let Church leaders know how many people could be accommodated in Jackson County, the elders of the Church in conference would decide who would go. Section 63, revealed on 30 August 1831, also said that Joseph Smith would be able to determine by the Spirit other individuals who needed to go to Zion. Those going to Zion had to have a recommend from either the bishop in Kirtland, who was Newel K. Whitney, or from three elders in the area where they lived before they could depart. Using such a process, the church had approximately 1,200 members in Missouri by early 1833.

3.    The reference in section 61 of the Doctrine and Covenants to “the destroyer” riding “upon the face” of the waters was likely interpreted by early Saints as death, rather than as Satan. In much of Protestant discourse in 1830s America, the “destroyer” was often equated with death or the “Angel of Death.” In America at that time, diseases often spread along waterways. These rapidly spreading diseases frequently led to numerous deaths. By the end of July 1832 (less than a year after this revelation was given), for example, a cholera epidemic that proliferated via the nation’s waterways had killed 2,000 people in New York City alone.

4.    Some revelations that are presented in the Doctrine and Covenants today as one section were originally dictated by Joseph Smith as separate revelations. Section 72 of the Doctrine and Covenants was originally three separate revelations, while section 75 was two. We know this by looking at early manuscript copies of the revelations. Newel K. Whitney, for example, had a copy of what are now verses 1–22 of section 75 on one sheet of paper, noting that it was given to “10 Elders.” A separate sheet of paper in Whitney’s possession contained what are now verses 23–36 of section 75, stating that it was given to “the Elders.” Likewise, when John Whitmer copied these revelations into a revelation book he was keeping in Missouri, he presented them separately and under different headings.

5.    The “United Order” mentioned in sections 78 and 82 of the Doctrine and Covenants actually refers to the “United Firm,” a governing body operating in the church from 1832–1834.  The United Firm was a group of nine men set up in April 1832 to govern the Church’s mercantile and publishing efforts. The firm included six men—Joseph Smith, Sidney Rigdon, John Whitmer, Oliver Cowdery, Martin Harris, and William W. Phelps—who had been appointed “stewards over the revelations” in November 1831 and who constituted what would become known as the Literary Firm. The United Firm also included the two bishops in the Church, Edward Partridge and Newel K. Whitney, and Sidney Gilbert, who was the Church’s agent and proprietor of the Church store in Independence, Missouri. Frederick G. Williams and John Johnson, who held large parcels of property, were added in 1833. The firm served a governing role in Church affairs for two years until it was disbanded in 1834.

6.    When Joseph Smith traveled, whether on missions or to visit Saints in other locations, he missed his family and experienced homesickness. Two letters that he wrote in June 1832 and October 1832 to his wife Emma highlight the tender feelings he had for his family when he was away from them. In the October 1832 letter, he wrote to Emma, “The thaughts of home of Emma and Julia [Joseph and Emma’s daughter] rushes upon my mind like a flood and I could wish for [a?] moment to be with them.” He similarly told Emma in the June 1832 letter that he wanted to “see little Julia and once more take her on my knee and converse with you on all the subjects which concerns us.”

7.    Joseph Smith’s idea to write a history of his life, which contains his first account of the First Vision, may have come while he was staying in Greenville, Indiana, in June 1832. Joseph was in Greenville with Newel K. Whitney, who was recuperating from broken bones he had sustained in a stagecoach accident as he, Joseph, and Sidney Rigdon were returning to Ohio from a trip to Missouri. Joseph stayed in Greenville for about six weeks, a sojourn he had not foreseen and that was difficult for him. He wrote Emma that he had “Called to mind all the past moments of my life” while in Greenville and had “Shed tears of sorrow for my folly in Sufering the adversary of my Soul to have so much power over me as he has had in times past.” His sorrow was placated by the knowledge that “God is merciful and has fo[r]given my Sins.” Sometime in the months thereafter, Joseph composed the first history of his life, emphasizing in it the forgiveness he had obtained for his sins after he had “cried unto the Lord for mercy” and was visited by him—his first description of the First Vision. You can read this account on the Joseph Smith Papers website.

8.    When Church members first heard of Joseph Smith and Sidney Rigdon’s vision of the three degrees of glory, many of them found it difficult to accept. Some members struggled to reconcile the idea of three separate degrees of glory with their traditional Protestant notions of just a heaven and a hell. Brigham Young later remembered that when he first heard of this vision, “it was so directly contrary and opposite to my former education, I said, wait a little, I did not reject it, but I could not understand it.” Others, such as Ezra Landon, even fell away from the Church because of it. However, many members saw it as containing “great & marvilous things.” As Joseph Smith’s manuscript history stated, “Nothing could be more pleasing to the Saint, upon the order of the kingdom of the Lord, than the light which burst upon the world, through the . . . vision.”

9.    When the first individuals were ordained to the high priesthood, or the office of high priest, in June 1831, many of them did not grasp what the responsibilities of the office were. Levi Hancock, for example, asked Lyman Wight, who, under Joseph Smith’s direction, had performed many of the June 1831 ordinations, what the priesthood was. “I did not understand it,” Hancock remembered, “and [Wight] could give me no light.” Joseph Smith provided more instruction to Church leaders in October 1831 and also revealed more about the office in his translation of the Bible, but a more complete instruction did not come until September 1832, when Joseph received a revelation that is now section 84 of the Doctrine and Covenants. This explained the responsibilities of the greater, or higher, priesthood, as well as the duties of the lesser priesthood.

10.    At the January 1833 conference where the School of the Prophets was first organized, women were in attendance and spoke in tongues. Although the membership of the School of the Prophets was exclusively male, women attended the conference where the school was first organized. After the conference opened with prayer on 22 January 1833, Joseph Smith spoke in tongues, followed by Zebedee Coltrin and William Smith. Thereafter, the minutes of this meeting state, “The gift was poured out in a miraculous manner until all the Elders obtained the gift together with several of the members of the Church both male & female.” The following day, the conference continued, but the minutes are not clear on whether women attended this second session as well.

The second volume in the Documents series of The Joseph Smith Papers contains over 80 documents produced by or at the direction of Joseph Smith from July 1831 through January 1833. These include 8 letters, 42 revelations, minutes of 22 meetings attended by Joseph, and 2 licenses signed by him. Thirty-four sections of the Doctrine and Covenants are represented in the volume. Each document has a rich historical introduction and annotations to place it in its historical context and enable readers to better understand Joseph’s revelations, letters, and other papers. The volume also contains high-quality maps and biographies and is an indispensable resource to the study of early Church history and the Doctrine and Covenants. For more information about the Joseph Smith Papers, see josephsmithpapers.org.